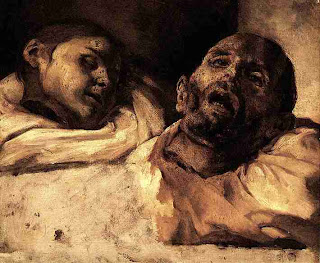 Thinking about Gericault this afternoon. As before, I thought of the amazing, harrowing series of still lifes (nature mortes, to be sure) he produced as studies for The Raft of the Medusa. They were pretty meaningful to me when I first encountered them in black and white reproduction while at Vassar in a book, iirc, devoted to a complete analysis of the Raft. Not due to their inherent gruesomeness at all but to the very unflinching way he used them as objects, as things equivalent to cantaloupes or vases. Of course, you can't help but see them as former parts of human bodies and are reluctant to re-view them as hunks of meat and bone but this is precisely the great service Gericault does for you. The hubris is stripped away; the core reality remains. The viewer is obliged to deal with it.

In the past few years, when I've thought of these works, I've been somewhat surprised at the absence of images available on the net. Aside from the one above, which I guess has amassed a bit of notoriety as representative of the group (and it's a fantastic painting, imho), which includes piled hands, feet and heads, I'm unable to locate any. This is strange in one respect but may speak to the power of the images, how repellant their message is found to be, even now. I mean, Gericault is a fairly major artist and these paintings were, to the best of my knowledge, unique in their time and remain extremely powerful today. Yet they seem to be by and large ignored.

I note a book on the subject was published in 1999 by Jason Dewinetz, an edition of a couple hundred copies. Otherwise, they seem too hot to handle, an impressive achievement for works pushing 200 years old.
Posted by Brian Olewnick at 5/30/2007 02:39:00 PM

I've never heard of this artist. Pretty interesting. The head on the right reminded me of the cover of Naked City's 'Grand Guignol'.

"Raft of The Medusa" is fantastic, probably my favorite thing in the Louvre. there's a great reproduction of it in Julian Barnes-A History of the World in 10 1/2 Chapters.

probably my favorite thing in the Louvre

You obviously haven't been to the gift shop!

Sergio, you might find the story behind the "Raft of the Medusa" worth your while.

Jon, sorry but the official ranking of *greatest* Louvre paintings is:

That's just the way it is, nothing I can do about it.