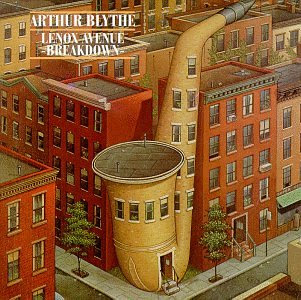 Is it a fair question to ask why there haven't been, let's be conservative and say over the last 15 years, any avant-mainstream albums as strong as Blythe's "Lenox Avenue Breakdown" (1979)? Oh, I'm sure there have been some contenders and if I wanted to sit dowen and think of a few I could probably toss out a handful of possibilities. But this one stands up so well. If I knew there would be music of this calibre at, say, the Vision Festival, I'd be there every night.

Blythe (still referred to in Stanley Crouch's liners as "Black Arthur" at this point), Blood Ulmer, James Newton (also at or near the height of his powers), Cecil McBee, Jack DeJohnette, Bob Steart and Guillermo Franco form as fine an avant mainstream group as you could ask for around that time. There's a vague rock-like feel to the session, maybe as a result of DeJohnette's propulsive drumming (you can pick up echoes of Miles' late 60s bands) and it certainly energizes matters. The pieces are all surging as well, no concession to balladry or (for these players) excessive free playing. Plus, it came out on Columbia, of all places. That was a major coup at that time. I think Blythe was the first musician to come out of the "loft scene" to sign with this major a company. Stayed with them until '87, longer than one might have guessed.

This group of musicians, for my bucks, are emblematic of a certain breed who do far better in more melodic, "straighter" settings than they do in free ones. Here, they manage to beautifully balance on that knife's edge between form and pure energy, really one of the best examples of that tightrope walking that I'm aware of. Some 28 years later, it reads as absolutely contemporary, more so (for example) than your average Viz Fest performance which almost inevitably sounds dated even as it's being created.

The only other Blythe album I own is "Blythe Spirit" (I suppose the title was inevitable somewhere along the line--awful cover I'll do you a favor and not reproduce here) from a couple years later. It's listenable, I guess, but the fire is largely gone, Blythe well down the path toward the blandness he'd achieve in subsequent years, at least when I've had the occasion to hear his music. I think the last time I saw him perform was as a sub witht he World Sax Quartet in Prospect Park, Brooklyn, more than ten years ago. Nice bunch of musicians assembled, deployed in various groupings: Abdul Wadud, the late John Hicks, Hopkins, McCall, Bob Stewart once again. But the only track (well, "Reverence" is OK too) that really comes together for me is his trio with Stewart and Amina Claudine Myers (on organ), the spiritual "Just Another Walk with Thee". Wonderful organ work from Ms. Myers. She's another one that, in my experience, is miles better the less free she plays.

I note in passing that the back cover portrait photo is by William Coupon. Back in October 1979, returning from our honeymoon at Block Island, Linda and I shared an Amtrak compartment with Mr. Coupon, then an aspiring photographer. As I recall, we found a common interest in the downtown loft jazz scene and spent an enjoyable few hours talking; very nice guy. I was pleased since then to find his work pop up all over the place, including things like TIME magazine covers. He has, and appears to have largely maintained, a fairly singular conception, his subjects often placed against a grainy background (hung burlap or linen, maybe?) lit with a single, low intensity light. He has a site with many images available for perusal here. Well done, William!