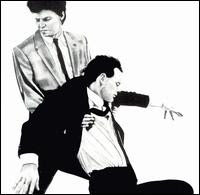 (Still one of the great covers)

Trying to think back how I became aware of Branca's music. It was when "The Ascension" was issued, in 1981 and probably either through a Village Voice article or having heard something on KCR. I was entirely unaware of his no-wave experience with the Theoretical Girls and some other bands. But around that time I was just beginning to acknowledge the possibility of rock still having something to offer (not an easy sell for me at that point!) and the notion of someone doing instrumental music with massed electric guitars was intriguing.

Well, this album knocked me out. Much has been written, accurately I think, about the basic Romantic constructs behind Branca's music, the way it has more of a fundamental resemblence to Tchaikovsky or Rachmaninoff (think "Isle of the Dead") than post-LaMonte Young maximal dronage. And I'm sure that's part of what appealed to me, that sort of approach still having a pull at the time, especially when layered with modern trappings; likely still does, truth be told. "The Spectacular Commodity" has an amazing tension-and-release aspect, a pure orgasmic thing that's undeniably (if amygdallically) effective. I still find the title cut to be the strongest, also the one that points most clearly toward the direction Branca would take in ensuing years with those huge, cloudy masses. The conclusion of that piece remains one of the more exciting things I've ever heard. 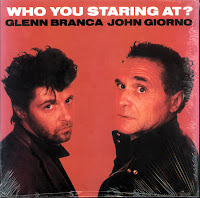 Hee-hee. Happy I could locate an image of this one. Don't think it's been issued on disc? A split LP on Giorno Poetry Systems. The Branca piece, "Strange Smells", was written for Twyla Tharp. It's first half is pretty much as stellar as anything on "The Ascension" but it comes to a grinding (intentional) halt about midway through and lurches awkwardly to the end. The Giorno tracks are great fun, the cantankerous old lech (I realize now that he was only about 46 when this was recorded) ranting and raving about day-today botherations.

We got here yesterday We're here now And I can't wait to leave tomorrow or I'm spending my whole life being around people I don't wanna be with.

I caught Branca in action for the first time at St. Marks Church in 1982, an event that would eventually be issued as Symphony # 2. I remember arriving late and having to take a seat up in the balcony (or choir loft). It was a kind of rotunda, several of his homemade guitars (banks of three or four 2x4's strung with gu 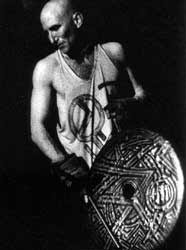 itar string) around the perimeter with normal guitars and basses and Wischerth's drum set. The interior of the circle, about 20 feet in diameter was vacant save for an enormous "bass drum" some five feet wide, set at an angle to the floor, maybe a 20 degree tilt. I'm not sure how much of a profile the percussionist known as Z'ev carries these days but he was a rather impressive figure back then. Bare-chested (though there may have been leather straps crisscrossing his upper body), he strode into the center of the space carrying a club or two with which he began to beat said drum. Loudly. He soon attached heavy chains to his wrists, those chains in turn attached to various sheets of metal, basins and Allah knows what else. He proceeded to twirl (a word that seems too dainty here) these items around him, transforming himself into a sun about which rotated an asteroid belt full of metallic detritus creating an ungodly--and fantastic--welter of noise, the bangs and clangs resounding through the church space (I have a sneaking suspicion the duration of this prologue was cut for the disc release). For sheer physical endurance, it was an impressive enough display. Eventually the band proper assembled and the volume level rose even further.

Two things stood out at the time. One was that such a huge volume could be generated by such minimal physical action on the part of the guitarists, especially on the homemades. They played them "percussively" with thin wooden rods, moving their hands all of a couple of inches , looking for all the world as though they were gently tapping. The second thing was the way the overtones resulting from the varying tunings of the guitars manifested as a buzzing, palpable presence deep within my ears. I swear, it was like a molecular choir had taken up residence on my stapes. Amazing effect.

Saw Branca and his ensemble twice more after that, once at Lincoln Center (Alice Tully Hall) which I think was part of a subscription series for many of the attendees, resulting in the amusing spectacle of older folks scurrying rapidly toward the exits moments after the music began. Branca hurling himself around the stage probably didn't help. (btw, his, erm, conducting antics are pretty annoying). The last time was at the Kitchen for a performance of his Symphonies #8 & 10, maybe 1999 or so? I think my interest had begun to pall a bit but I have to say, that concert was extremely strong. It was a relatively small group, maybe 7-8 guitarists, but it was also in a smaller space and they filled it up and then some. Come to think of it, the recording of those pieces is likely the last thing I've really heard from him.

[Addendum: John Cage once famously referred to Branca's music as "fascist". I can see his point (using the term in its loosest sense) but...there's some nexus along the line from "fascism" in the aesthetic sense, ie, an insistence on rigid form, a perceived martial quality, etc. and transcendence that might be achieved by the hyper-concentration on just such a form (think Vermeer). I believe that Branca at least approximates, however distant, this last in tracks like "The Ascension", and some of the "cloudier" moments in later works, though I admit that Cage's comment slides uncomfortably close to the bone. A knotty little issue, imho.]