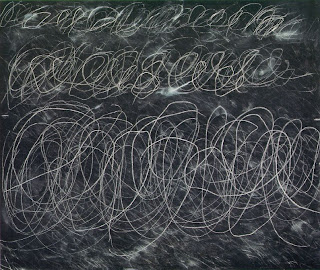 The first time I ever met Keith, in Boston at an AMM performance in 2000 (? I think that was the year), he talked about his appreciation of failure and of the impossibility of actually communicating with other musicians (via music, I would think, but maybe in general given subsequent developments?). On the other hand, it's not something you particularly want to believe so maybe you test it a bit.

MIMEO did something along these lines, as I understand it, with the performance at the Serpentine Gallery in London in 2003 where members were grouped in various small configurations around the space at enough of a remove from each other that no individual could hear what the ensemble in its entirety was doing. People who were at this event can comment as to how they thought it worked; the CD issue necessarily provides a false picture though it may or may not have merits on its own terms as an "independent" artifact.

Rowe extends this communicative trust one level further, eliminating any possibility of the ensemble members knowing for a fact what each other is doing, but asking them to create work as though they do. He certainly shapes the outcome by requesting that each only contributes 4-5 minutes worth spread over an hour, thus pretty much insuring a relatively sparse sound field. One could imagine each member impishly figuring on doing five concentrated minutes of squall, sequenced over the hour by going alphabetically, perhaps, believing that the others would be thinking similarly. Could've happened, but didn't. Even if this occurred to someone (oh, say, Pita :-)) the risk of being the only one to act on it might be too intimidating.

This is one of the places where Prisoner's Dilemma issues arise, the whole notion of Cooperate or Defect. There's a difference though, and a salient one. In PD situations, the individual is looking to maximize gains for himself; the paradox arises when it's clear that everyone will do better if all cooperate, but it's risky to choose to do so because a single defector can screw things up for everyone else. In the MIMEO situation, the desired outcome is a "good" piece of music, something that almost necessitates cooperation so the temptation to defect should be minimal. What would constitute defection, though, in this case?

I didn't know the back history when I saw AMM with Formanex and John White at Vand'oeuvre about five years ago. They were performing a few pages of Treatise and (to make it brief) whereas the two ensembles were creating pretty restrained sounds, White sat there creating the most godawful racket, replete with recordings of babies bawling, sheep baaing, lord knows what else. It was pretty jarring and uncomfortable. In fact, it was so blatantly bad that I half-figured something must be up. Cornering Keith afterwards, he acknowledged that he had indeed asked White to "make noises that one simply doesn't do in this context, normally", ie, in extremely poor taste as opposed to restrained tact (poor taste versus tact, however, could easily be another discussion). Made me substantially reconsider what I'd just heard, "rehearing" it in this new light. (Jon disagreed with me on this, incidentally, presumably still does). It was only in recent years when I researched early performances of Treatise (1964-65) in which White was involved that I discovered that this practice of his has a long pedigree. Early on, he understood that works like Treatise were too often approached with a seriousness that verged on the religious and, moreover (I'm guessing), any ostensibly free system that said, implicitly or otherwise, "These things shall not be done" is suspect and ripe for deflating.

But how would one distinguish between considered actions like White's and simple grandiose posturing, someone in MIMEO playing guitar god for a few minutes or belting out a Celine Dion song? Good question, I have no idea. Except that I think it would come through somehow that, for lack of a much, much better word, you'd feel it.

Anyway, just some further thoughts on this release which, in fact, I've yet to listen to a second time, rather preferring to think about issues raised on first listen.

As far as the sounds go, the imposition of pattern recognition where there is none (?) on the part of the listener strikes me as one of its more fascinating aspects. Like seeing faces in clouds, you just can't help yourself.
Posted by Brian Olewnick at 6/12/2007 09:18:00 AM

I remember having similar discussions as to whether "free" improvisors who don't always play in the non-idiomatic idiom were really playing free improv or if what they were doing was even more "free" than folks who were continually using the more standard vocabulary.

Among Brits, Steve Beresford may be the archetypal early example of this; viz the special Company week issue of Impetus in which Braxton says he wanted to follow Beresford around on the street to see if it would give him some insight into why he was playing so differently from others in the pool.

I recently finished reading George McKay's "Circular Breathing" wherein Beresford is referenced and interviewed as (among other things) a representative of the sort of musician who goes against the common flow, here both having to do with free improv and some degree of leftist orientation (at least as collective concerns apply to music making). Struck me as a very interesting fellow. (I'm only marginally familiar with his work, have only two or three discs) Not too surprising, therefore, that Braxton would note the "odd bird" quality and be intrigued by it.

Maybe in order to be successful, these sorts of undertakings must fail. In a completely different context, Jacques Derrida has talked about the necessity of failure in any work of literature, art, or music that is deconstructionist, that is, works that seek to undermine established structures (which I certainly think this area of music does.) Sometimes I see every taomud recording as a kind of strategic failure...beautiful failure, even. I love failure.

I will listen to Sight for the first time tomorrow and post any additional thoughts, but I do want to say that I think there is a difference between (at least my) understanding of intentionality in performance when heard on a recording and when heard in live performance. In live performance I am often watching the musicians, and I'm more likely to be able to distinguish who is making what sound (though I often fail here as well...another good failure.) On recordings, I don't pay much attention to intentionality; because the music is, for me, still so radically different from most any other type of music I ever hear, for me my critical faculties are somewhat muted. I don't think I really care if a particular piece is good or bad. I am more attuned to the emotions the piece calls to mind for me.

Case in point: (to close this long post)...so far I don't know what to make of The Room. I've read how everybody who's heard it seems to love it, but for me the music after a few listens feels so claustrophobic, so enclosed, that it makes me uncomfortable, makes me feel as if I am in a sense being attacked by the sounds. Is this good or bad? Does my reaction fit with Rowe's intention or does it not? Do these questions have any relevance whatsoever?

I was lucky enough to spend some time with Keith over the last couple of days and part of that time was spent sitting in on a workshop in which he imparted a couple of hours wisdom onto a group of mainly younger musicians.

Keith worked hard to try and get the group to understand their place in the room they were sat in, to understand everything around them and use this to assess the right time to make a sound, regardless of whether they wished to play with the rest of the group or not. The idea of making sounds that fitted into the overall music was of much less interest to Keith than the idea of the musicians truly being in the present, understanding where they are and what they were doing fully before contributing something that really mattered.

These are quite abstract sentiments to try and put into words, but they make perfect sense to me, I spent much of the ten hour train journey home yesterday trying to figure out how all of that works for me as a listener.

Keith is very happy with how sight came out. One thing he did say is that he thinks most of the musicians contributed less than five minutes, he personally played about two minutes, which means I can stop trying to hunt down the extra three minutes of hs material I couldn't spot!

seems like the best place to ask Richard: why is the personnel listed in that order? not alphabetical, not in the order they turned the pieces in. just curious...

There is no intentional order Jon, they are listed randomly. Keith sent me an email that (I think) he just copied and pasted the eleven names from the address line of one of the many MIMEO emails and thats how they came out.

He liked the fact the list was just random and asked that we left it like that.

the whole thing looks fantastic, easily my fave Cathnor design thus far. just one listen so far to the sounds...

on second listen, Yuko came flying downstairs midway saying "that's Pita!". then she made me explain the whole project to her, and she wrote it up here:

she said it's the best non-Erst EAI record in a while, she hates almost everything I play in that area these days. FWIW...

Listened again last night, picked out Keith on a couple of occasions but that's all I'd likely be able to do.

Still fascinated by the way one imposes patterns on the sounds here, assuming communication for a split second before realizing that it doesn't exist.

I gotta concur with Jon there, while I was initially skeptical and probably made the first Smell the glove joke in the end I like this design the best. I've given it about four listens so far, mostly on the stereo but also a closer one on headphones and I think it is really fantastic. Definitely my favorite Cathnor and probably my favorite disc from the year so far.

Thanks Robert, and Jon say thanks to Yuko for me. I am obviously very proud of how sight came out (even though I had zero input into its creation!). For me its leagues behing The Room if I had to select a favourite release of the year though...

Why aren't you guys responding to crawjo david jones' fascinating post about derrida and how crawjo loves failure?

because he's an idiot, right?

I imagine this is a hopeless thing to expect, but if you're going to make puerile comments like the above, at least have the graciousness, not to mention balls, to use your name or some reasonable approximation thereof. We're not 12-year olds on a chatboard here.

I've met David several times and, no, he's not an idiot, far from it. If you actually want to comment on his post, feel free. Me, I think he raises some interesting issues. I'm still processing my own reaction to Sight, which I'll get around writing about sooner or later.