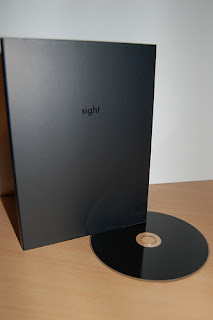 Keith mentioned the idea for this MIMEO project quite a while back, maybe as much as two years. I was immediately taken with the notion on several levels, not the least of which is its relation to Prisoner's Dilemma issues.

[I suppose there are readers who don't know what I'm going on about, so for their benefit: MIMEO is a 10-11 member ensemble of musicians wielding electronic instruments including guitars, computers, synthesizers and other such stuff. It's a collective group with individual members initiating projects for given occasions. They've only performed a relative handful of times since, what, around 1998, due to the unwieldy nature of the band, conflicting schedules, etc. This is their fifth release (? someone check me on that). The idea behind this recording is the following: each of the members of MIMEO, who are normally geographically apart from one another, was to create 4-5 minutes of music spaced over a one hour CD. They were to do so as if they were in performance with the others, anticipating what they thought the others would do and adapting their contribution accordingly. The music, of course, could be as spread out or concentrated as they wished. Each musician would send his or her CD to a mixer (Marcus Schmickler in this case) who would, without listening to any of the entries, merge them onto a single disc. Then, a record company would be found who would release this product without listening to it beforehand, so that the first people to actually hear what MIMEO had accomplished would be those who bought it in a record shop.]

Keith conceived of this as a homage to Cy Twombley who, though the story may be at least partially apocryphal, reportedly would on occasion blindfold himself and making markings on canvas with a brush held in his left hand. The title of the disc, "Sight", is a multi-level play on "Cy T".

Well, the finished result arrived yesterday. It raises several questions (at least), some of them perhaps uncomfortable. I'll write more later, I'm sure. But first impressions - 1) purely musically, it works very well. That is, if I was unaware of its nature, I think I'd find it an enjoyable, sparse, recording, fascinating in the way events overlap or don't. The unintentionality of this interaction is absorbing to "watch" unfold. My mental picture was of sitting in some high perch overlooking a city park, choosing ten or so "items" to concentrate on (people, dogs, trees, cars, whatever) then observing the patterns formed by their unwitting interaction. Humans always look for patterns and causality--you can't help it--and it was great fun to momentarily, just for a second!--think of how nice it sounded when two elements emerged "in unison". 2) It seems as though everyone took Rowe's advice to heart, that is, there aren't any overt displays of "listen to me!" noise, no one opted for five minutes of intense guitar-wrangling, etc. I did sort of anticipate, correctly, that someone (who?!) would insert a brief little squiggle right at the 60 minute mark. Although....I suppose someone could have adopted the John White approach, the intentional doing of things "that aren't done" and erupted brutishly. I'm glad, I guess, no one did, but I wonder if that would have been "wrong".

One question that crossed my mind while listening: Almost automatically, you tend to think of this as a one-off affair. It would be absurd if this method was used often by various groups. But why not? I'm sure it won't be and part of me says, "Well, of course, it wouldn't make sense." But why do certain ideas seem to naturally fall into the "one time only" category and others don't?

I suppose the biggest question most listeners will have, particularly those not sold on the virtues of taomud, is: What does it say about the genre that a recording such as this isn't all that distinguishable from one done by musicians in the same space, at the same time? Well, is it or is it not, firstly. Secondly, if so, is this really a problem?

It would be cool if the musicians had self-documented their process of performing those five minutes: how they each prepared before and during their performance and whether the combined result matched their own individual expectations. Even video footage of the performances would be interesting to see.


As for the one-offness of the thing, I don't see why that necessarily has to be the case. I suppose something like this could go from fascinating concept to cliche gimmick pretty fast, but if the results are indeed beautiful and hold their own independently of process, then maybe it's a concept worth exploring further. To some extent, I see this as a logical continuation of the kind of experiment in which one or another of the elements of the collaborative process was removed or inhibited. For example, those long-distance asynchronous collaborations (From:/To: on A Bruit Secret, for example) or Otomo's approach in Anode where musicians were instructed to not respond to each other. I dunno, I haven't heard this puppy yet, so I should probably refrain from commenting until I have.

As for the other implications you refer to...hmm, I dunno. I'm reminded of the (most likely apocryphal) story of a jazz musician (Mingus?) who brought a bunch of untrained children to play instruments behind the stage. According to the story, the critics and intellectuals listening to this thought it was groundbreaking free jazz experimentation until they found out they had been duped. We probably wouldn't care, and in fact might dig the concept even more once we found the source.

Sergio, yeah I'm hoping Cor might chime in on IHM or JC when discussion of this disc gets going.

Just to be clear, I didn't at all mean to say that it should be a one-off, just that it's likely to be the case. But who knows?

And on the last point, I think the question has more to do with "communication" between improvisers being a necessity for a vital performance. Well, there's communication and then there's communication and I think, at the least, Rowe's stretched the meaning of the term here in an interesting way, ie, how well the musicians know each other and understand the dynamic of MIMEO (which seems to be pretty well).

Thanks for the write-up Brian. I've enjoyed the music a lot too, which is a real relief after several months of fretting about whether this was a good idea or not!

I asked similar questions to those you have posed. If the idea for this project hadn't already been talked about a lot in advance I would possibly have suggested that sight was released without anyone knowing how it was put together, to see if anyone could tell..! I'd like to think that I might have been able to tell that this was no 'ordinary' improvisation however, but we will never know.

I agree that Keith's brief for the musicians to try and sense what their colleagues may have been doing seems to have been closely adhered to, and I don't think that if you had asked any old group of improvisers to do this it would have worked anywhere near as well. The fact the MIMEO guys have played together for so long (and yes, this is the fifth album ignoring the fact the first one came out on two different labels) is probably what lead to such a 'together' piece of music. One thing I wouldn;t say though is that it sounds particularly like MIMEO...

Next up is the challenge of sight Live! ;)

Sergio, copies should be with Jon any day now :)

I think this is a wonderful concept...sort of like the Zen of improvising, or something along those lines. I look forward to hearing the disc.