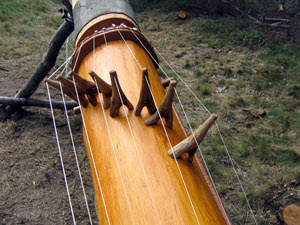 I don't know the first thing about traditional Korean music. Well, maybe I know a thing or two, but not very much and certainly not enough to even remotely tell whether a given performance is up to snuff. For "Korean" you can pretty much substitute any non-Western ethnicity you wish (and a host of Western ones as well), no matter how much of a given area's music I've heard. Trying to recall my first exposure to Korean music and I'd guess it was one of those kodo drum ensembles which can be mightily impressive. I'm sure I heard at least one such group before Laswell began promoting Samulnori as a part of SXL and on their own, both very enjoyable recordings. And I knew a bit of Sang Won Park's work in improvisatory contexts; Jin Hi Kim's as well. But...how the hell do I know if they're actually "good" by Korean standards or just flashy enough to impress Westerners, a kind of Riverdance imposed by cynical Korean marketers on an unwary, world music hungry West? Does aesthetic merit somehow osmose through the barriers of ignorance, revealing itself to sufficiently sensitive ears?

I wonder about this often, including this morning when I was giving second listens to two discs I'm loving a lot, the World Music Library items I recently bought of Korean Kayagum Sanjo Music. I figure it's reasonable to defer to the judgment of the folks who recorded the music (the producer is Nishida Katsuhiko), that they had some basis for winnowing out the better contemporary practitioners of this art. What else can one do? There's no way I'll ever have near enough time to really study this, or any area's, music in the depth required to do it justice. I can only skim the surface, probably a molecule's thinness of skimming at that.

So, if I report to some interested acquaintance that this music is "great", it's with the nagging knowledge that I'm basing this judgment entirely on my own history, my own superficial knowledge of the genre, not in any understanding of the music or culture from which it arose. In practice, given that most of my acquaintances are from roughly the same background as myself, this is all well and good but part of me awaits the knowledgeable Korean who reads this and says, "You don't know what the fuck you're talking about! Chukp'a and Kim Tong Jun are the Kenny G. and John Tesh of Korean music! They suck royally!" Thus abashed, I'd dutifully hunt out more able musicians.

But for now, in potential ignorance, these are damned fine recordings. Still waiting to hear the King World Music Library release I don't find pretty fantastic.
Posted by Brian Olewnick at 6/30/2007 01:18:00 PM

Hi- It's a strange image; "the Riverdance of Korean music...." Regarding Riverdance, an Irish friend of mine informs me that Riverdance is hugely popular and admired *in Ireland*. I was somewhat disappointed to hear this-- I figured it would be loathed as a misrepresentation or a diluted and imitative (and possibly embarrassing) spectacle.

It seems to me there's a few variations for forming an opinion on any music: taste, educated taste, deeply informed taste. "Taste" is the functional element no matter what one's level of knowledge and familiarity is.

You know, when I was casting around for the appropriate example and thought of Riverdance, I did have a momentary flash to the effect of: I'm really only basing this on the TV commercials I'd seen which did, in fact, look utterly horrible, but maybe there's the considered opinion that Riverdance is actually pretty good? Nahhh....

In my experience Riverdance is indeed pretty much reviled in Ireland, although thte traditional Irish dance that it so badly appropriates remains popular.

Here in England though the stage show and the many other vague copies of it always sell out. The distant days when anyone had any taste in this country are sadly long forgotten.

Off to the Emerald Isle tomorrow as it happens for a few days. I aim to seek out a traditional Irish music shop I've been told of too.

Do yourself a favor and dig up some Korean Sinawi music.

I do actually have another recording on World Music Library of Sinawi music that's also fantastic, called simply "Sinawi Music of Korea". Any other recs in that direction would, of course, be greatly appreciated.

There's an "ethno" series released by JVC that used to have good distribution in the States but which I haven't seen around lately that had about half a dozen Korean discs, including what seem to be some sort of rural folk-ish (NOT singer/songwriter) styles, as well as discs of some of the slightly more common court styles and sinawi. The reason I'm tentative about what these CDs documented is that the liner notes on the whole series were in Japanese only and I haven't a Japanese-reader check them out.

The series also includes discs of the Dagar Brothers, Nusrat Fatah Ali Khan and a ton of Indonesian things. All the discs I've heard in the series have been well-recorded and, as far as I can tell, good examples of the music in question.