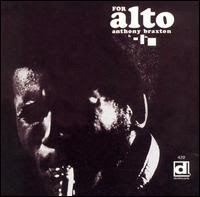 Well, what with all the foofaraw about my Vision Fest comments, I thought it would be a good time to dip back into my vinyl trawling and, wouldn't you know it, we find ourselves at the edge of Braxton territory. Among other things, listening to the still astonishing "For Alto" serves as a fine tonic for much of the tired, uninspired playing heard this past weekend.

I'm pretty sure my first exposure to Braxton's playing came when I heard Dave Holland's classic "Conference of the Birds" LP, probably in '73. I was getting the NMDS catalog at the time and they carried the Delmark label so I quickly went and ordered "For Alto".

Where to start? For one thing, Braxton is 23 years old here. 23 fucking years old. (Allow me an aside: Were there any 23-year old or younger musicians in evidence last weekend? Not that I saw. Hell, were there any audience members that young? ahem, sorry) You have this amazing young musician issuing two LPs worth of solo, improvised alto saxophone. I hope younger readers realize how utterly unprecedented this was. There had been a handful of recorded solo saxophone performances in jazz including Coleman Hawkins and Dolphy, but an entire record? Two records? Improvised? Yikes.

(Another lovely facet: Braxton is already dedicating his pieces, deferential to those who inspired him even as he blazes new ground. Fantastic, on Side One, to have dedications to both Cage and Cecil Taylor.)

After a brief, soft piece dedicated to Jack Gell (who, iirc, was a teacher of Braxton's?) we're launched into the Cage piece. What the relationship is might be hard to fathom but this is one rip-roaring, assaultive, unfailingly and volcanically creative improv. Stick this baby on stage at Orensanz and everyone could've gone home. I just goggled "Murray de Pillars", the dedicatee of the following, lovely track but find little outside of Braxton references though he may have been partially responsible for a Black Panther mural in LA. It's a fine early example of the sort of attack Brax would engage in periodically, contrasting delicate, flowery lines with harsh, abrasive ones, self-contained arguments. The Cecil dedication is in a similar vein as the Cage but more leapingly joyous with something of an explosive dance feel. He hits blue notes than erupts off them; very Tayloresque now that I think about it.

The sidelong "Dedicated to Ann and Peter Allen" (don't have my Martinelli discography handy to check the composition numbers) is the one that doubtless gave me the most trouble throughout the first 15 or so years I owned the album but is now possibly the deepest, most intriguing track. While the basic content is fairly lyrical in the best tradition of Brax free balladry, much of it impinges on the ultra-quiet territory explored much, much later by players like Butcher, Rainey, etc. Breath-tones, soft key taps, areas of silence, they're all here. It's not an area he frequented too much later on (to this degree anyway, unless I'm forgetting something) and I wonder what he'd say if asked why not? In any case, it's quite a beautiful piece, one that post-AMM fans should give a listen to.

The first cut on Side Three is a great early example of the kind of yearning, quasi-blues cry that would crop up again and again in his solo output; always felt Braxton dug deeper into this sort of song than any of his contemporaries. The second is a tortuous, wrenching piece, his alto sounding as if being torqued out of shape while being played. It also prefigures the kind of low pedal points Roscoe Mitchell would later use in pieces like "Eeltwo"; curious who was influencing who....It concludes with some wonderfully controlled multiphonics.

"For Alto" closes with another sidelong piece, a dedication to the late Leroy Jenkins. Again, one of the amazing things about this entire project, even aside from a double solo saxophone album in the first place (in 1968) is that Braxton makes absolutely no concession to conformity, doesn't remotely approach a standard, play in regular rhythm or confine himself to melodic or even post-Coltrane tonalities. The structures are rocky, irregular; in a word, difficult. Maybe only Mitchell (as heard on his contemporaneous "Congliptious") was in the same ballpark. This final piece is damned brutal, juxtaposing long pure tones with outrageous blats and squawks; very slablike. Richard Serra set to music should sound something like this.

"Where to start? For one thing, Braxton is 23 years old here. 23 fucking years old. (Allow me an aside: Were there any 23-year old or younger musicians in evidence last weekend? Not that I saw."

To start, you could try a bit harder. The young cats played on Saturday afternoon when you were socializing with your jc buddies.

Well, you're at least partially correct. Bisio started recording, near as I can tell, in 1983 so I'm guessing mid-40s; Ras Moshe is 39. I can't locate age details for Halvorson & Pavone but they appear young; and Wilkes is 28.

Those are the "leaders"; I assume many of the others might have been younger. Anyone in their early 20s creating at the same level Braxton was in '68? Or Roscoe in '66?

Look Ollie. I am not going into a level discussion with you. Your comments about Hamid's "insensitive overplaying" with Hrrisson and Fred make me believe that you don't get it anymore. Maybe you have peaked a couple of years ago and are now in a phase to endlessly repeat your mantra.

Hey, I've generally enjoyed Drake's work for a long, long time (think I first heard him on a Pierre Dorge disc from '88 or so). But even you might allow that no one's on the top of their game every night. Here, there were several times when I thought his contributions were unnecessary and that the music would have been better served had he bowed out for a bit. Not sure why that's such a big deal even if other observers disagree.

It's not a big deal and you are obviously entitled to you feelings, Ollie.

Yeah, there were some youngins at the Fest on Saturday afternoon - Corey Wilkes' entire band is under 30, pretty impressive.

I can't think of anyone making a recorded statement of this stature at such a young age.

UGK, a hip-hop duo from Houston, put out their first tape at 14 and had three full-lengths out by the time they were 23, including Super Tight and Ridin' Dirty, both of which I'd play 100 times before subjecting myself to another run through the dry-as-dust For Alto. even when I was a massive Braxton-head (50 CDs, saw him maybe 20 times in different contexts), I thought this was overrated.

but it's also a silly bar you set up, there aren't many artists in any area in their early twenties who have developed strong creative personalities. Ami Yoshida is the only EAI one who comes to mind quickly, maybe Martin Brandlmayr. anyone I'm missing?

I disagree entirely with any "dry as dust" aspect of "For Alto", obviously. There are Brax releases that merit that designation ("For 4 Orchestras" comes to mind) but not this one.

In any case, get used to it as I have a whole helluva lot of Brax on vinyl I'm looking forward to wading through.

Brian, curious about your take on McPhee's Tenor, particularly in relation to your perspective on For Alto.

Also, you should pick up the recently released Great Vision Concert by Fred & Harrison on Ayler & see if it stacks up to memory. It's the one we all caught way back when.

there wer folks under 25 in corey wilkes band as well as Nicole Mitchells band. the age median in those younger groups seem to span from 23 to about 32.

there were also younger folks in the audience. Though perhaps the music being presented is as much out of touch with that generation as are your ridiculous stodgy rants.

Jeez, here I thought Mr/Ms Anonymous found this place too depressing to stay around....I do kinda love how people will pick the negative sentence or two out of an utter rave and harp on it, but there ya go.

Derek, yeah I like Joe's Tenor a great deal. In fact, given a choice I probably prefer his solo work overall, going back to "Graphics". First time I met him, in '75, he played me a solo soprano take on 'Round Midnight that has stayed with me a long time as a prime example of an enormously creative reinterpretation of a standard.

I've seen the Ayler Records disc around and might pick it up one day to, as you say, see how it compares to my memory of the event (though, admittedly, that's so positive I'm a little reluctant to potentially mess with it.)

"The sidelong "Dedicated to Ann and Peter Allen" (don't have my Martinelli discography handy to check the composition numbers)..."

"much of it impinges on the ultra-quiet territory explored much, much later... It's not an area he frequented too much later on (to this degree anyway, unless I'm forgetting something)..."

I don't have time to search through his solo recordings from the last couple of decades, but I recall AB doing a breathy, key-tapping, non-"blown" piece during a solo concert at Wesleyan in 2005. There may be something in that vein on his new 4-CD "Solo Live at Gasthof Heidelberg", but I haven't listened to the whole thing yet.

yeah, there is a breathy sound piece on the AB Loppem solo box, I think somewhere on disc 2..can't remember...but it's fucking beautiful.

One of these days, I'll likely spring for the 9-Disc box. I have 5 or 6 of the Ghost Trance releases and generally enjoy them, though my favorite recent thing of his is (I think?) not quite in that area, Composition 247 with James Fei and Matt Welch. But I'd like very much to hear the box, if only as an end document to about a 10-year period in AB's career.

I last saw him solo at the Ethical Culture Foundation maybe four years ago. He was playing well, but only a couple of the more balladic pieces really moved me.