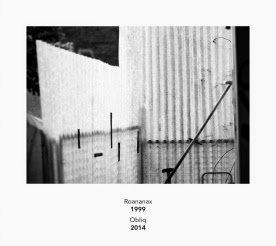 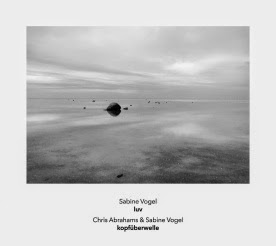 Volumes 3 & 4 of the ongoing "Berlin Series from Another Timbre which tend toward the split disc concept although here, the second disc feature flutist Sabine Vogel.

The first half of No. 3 goes all the way back to 1999 for a recording by a quartet consisting of Axel Dörner (trumpet), Robin Hayward (tuba), Annette Krebs (electro-acoustic guitar, mixing board) and Andrea Neumann (inside piano, mixing board) all of whom, I believe, were already members of the larger ensemble Phosphor (if not at this time, soon), though here they go by the name, Roananax. Mark Wastell's Confront label has been issuing items now and then from around the same period and the result, for me, teeter between the genuinely worthwhile and largely of historical interest only. Inevitably (sadly, I guess), listening like it's 1999 yields one result, while peeking in from 15 years later provides a different sensation. I had heard Polwechsel a couple of years before this, my first live encounter with this general area of music--a major event--and, int he year of this recording, ventured to Victoriaville for the first time, hearing I.S.O. among others, also game changers for me. Had I heard the five tracks here at the time, I've little doubt they would have had the kind of impact impossible to replicate now. Well, not impossible. I.S.O.'s sounds still move me as much as then but I daresay that's because, for me, they produced music on am especially high and profound level.

The music is, generally, less reticent than it would soon become with Phosphor and many of the other projects undertaken by the musicians involved. In a similar sense to some of those Confront releases, you get the impression you're catching them in a transitional phase between a more efi-inflected approach and the more radically minimal stance that would more or less become the norm within a couple of years. Krebs and Neumann in particular, often emit metallic, stridently mechanical bursts, operating mini sound factories while Dörner and Hayward, already using largely breath-oriented attacks, tend toward the guttural and spittle-infused. That's overstating things a bit as the pieces vary in numerous ways, including intensity, but I do feel a general sense of more forthrightness,of "performance". This is all fine and the music is actually quite engaging most of the time, perhaps with a wee bit of understandable awkwardness and lack of sure footing which tilts it back to that realm of historical appreciation as opposed to a "lost jewel" kind of status. Not a bad thing at all--I think it's good for gaining a fuller grasp of what was occurring where and when.

"Obliq" is another matter entirely, a 2014 trio made up of Konzert Minimal members Pierre Borel (alto saxophone), Hannes Lingens (percussion) and Derek Shirley (electronics). Two tracks, each about twenty minutes. In an odd way, though the music sounds nothing like the 1999 session, there's a similar sense of it being more or less representative, in an unspectacular way, of the current state of a given sector of new music. Both are fairly steady state, the first filled with low, electric and reed hum that, likely due to the presence of the alto as well as the general form, remind me a bit of Graham Halliwell's work from the early to mid oughts. The latter is also a little drone-based, beginning with higher, variegated frequencies before ultimately settling midrange, with attractive flutters from the alto (I think) and a nice layering of all sources. They're both perfectly fine, if a bit hard to differentiate from many offerings treading a similar pathway. I found myself wanting the relative smoothness to be disrupted somehow, even forcibly so, just to wrench the music from the contemplation...at least a bit. :-) Not bad at all, just...wanting.

Berlin Series No. 4 is also made up of two sections but here, each part features flutist Sabine Vogel, first solo ("luv") then in duo with Chris Abrahams on pipe organ ("kopfüberwelle").

Solo, yes, but using a wide array of sound sources including field recordings, objects, bansuri flutes, wind harps and, in fact, recordings made with Bennett Hogg on "wind violin" and "water violin". Yes, I wondered too, hence: 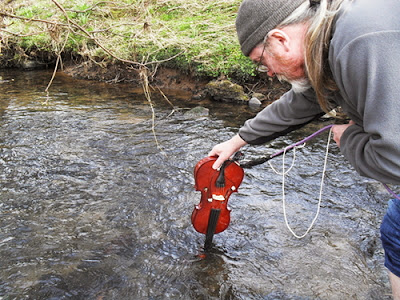 If I'm identifying the sound correctly, the latter is readily discernible here, some sixteen minutes in during a lovely, otherwise very still section. But guessing games are beside the point--this is a finely constructed soundscape, rich in layers but rigorously executed, always commanding attention and appreciation. Flute permeates (including the bansuris) but the environment is very alive with sounds, some ringing, others wafting--a slight tinge of the tropical. Also, odd as it may seem to say, very human sounding; sounds aren't as disembodied as is often the case in works like this, there's a palpable sense of of a person behind the breath sounds, very flesh and blood. Excellent work.

As is the duo with Abrahams, although the sound world is something else entirely. Abrahams creates several layers on the pipe organ, from a low pulsation to sustained, high, reedy tones while Vogel darts between, birdlike. Only because of my exposure immediately prior, I couldn't help but compare this piece to the Obliq tracks from Berlin Series No. 3 (unfair, I know) as there's at least something steady state about each. But, as with "luv", there's an overt, not reticent but also not pushy, human presence here that works marvelously. While clearly heard in Vogel's swooshes, gasps, and exquisite low notes, even Abraham's organ seems to be chuckling at times, providing a deep feeling of warmth. And despite the organ's consistent emission of long lines, there's substantial variation in both his attack and, more so, that of Vogel, who's constantly coming up with one good idea after the other over the course of the piece's almost 40 minutes.