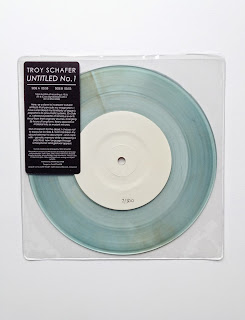 A 7-inch, 33rpm release on nice, mucous green vinyl, with speckles. Two tracks totaling only some 11 minutes, this is a case where I would have liked to have heard more, to have things fleshed out a bit but, perhaps that's part of the point. Side A was condensed from 36 hours of material, sourced from Schafer's violin (as well as viola and cello) and elsewhere (organ seems to figure in), into six dense minutes of collage not entirely dissimilar to some of Zorn's investigations into the area but much better, far less facile. Very cinematic in effect, it could easily work as a soundtrack for a dreamy/harsh video, the lush overlaying of strings near its conclusion being especially evocative. About Side B, Schafer enigmatically writes, "Out of respect for the dead, I choose not to expound". Whatever its essence, it's quite different from the preceding, a hollow set of scrapes (possibly from some mutation of a violin), with a subtle, grim plodding aspect, creating an image of a forlorn creature in some alien passageway, gamely wending its way through the dark, until things erupt. Within the brief track, the sudden welter of spiraling sound is disorienting and even unwelcome; this is one of the things I meant when I said I'd like to hear the ideas elaborated upon further, but so it goes.

My second experience with Schafer's music and another rewarding, unusual one. You can listen for ourself, below. 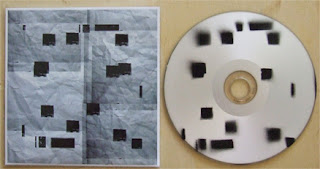 Consisting of Francesco Gregoretti on drums, Maurizio Argenziano and Sergio Albano on guitars. The six improvisations teeter between freeform noise (to me, often with an implied rock basis, with stuttering drum rhythms and vague references to rock guitar chords) and a kind of Frithian sound circa "Guitar Solos", a liquid rumble. When the former is in effect, my interest wavers; it's simply not the sort of venture that holds my interest these days. When the trio ratchets things back, as on the concluding "The vision is dancing", they find a more rewarding space, the guitars chiming against one another gently and almost randomly, the percussion causing small sprays of noise alongside, very spacious, very lovely. On the whole, a bit too hit and miss for me, though. 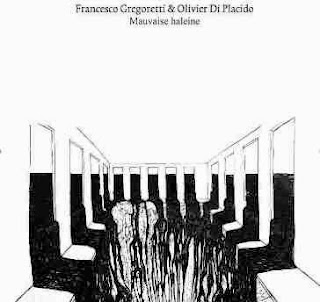 Um, that'd be "bad breath" for you non-Francophones. One less guitar than above, here with Di Placido in the chair and the results, to my ears, are far superior for several reasons. One, the sound is more transparent, less oppressive, lending a fine clarity to the proceedings. Second, Di Placido is simply a more imaginative, provocative guitarist (even if I still hear some Frith now and then), finding a wide assortment of attacks tailored to his partner's activity, almost always interesting and showing a willingness to stick by and root around for a while instead of hopscotching from one approach to the next; he's very impressive here. Too, Gregoretti adapts a different approach on drums, much more in the efi tradition, evoking Gunter "Baby" Sommer or Paul Lytton now and then, but also finding his own sound word that's like a freer extension of Ronald Shannon Jackson. Even when the pair lurch into territory tangential to that explore on the trio disc ("So Do I"), things are more sharply defined and forceful, juggering along thickly and with power. Even if the overall tone of the disc remains a bit outside my real areas of interest, what they do, they do with admirable intelligence and variation, much more impressively than your standard free drums/guitar duo. Well worth checking out if you're into this side of things.