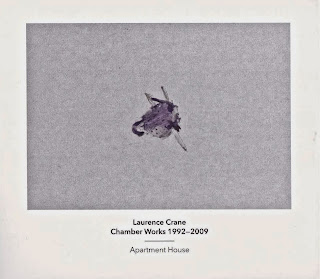 Sometimes I wish I had greater technical knowledge about music; often I don't. But when I read something like Michael Pisaro's excellent essay on Crane and he writes about a "major chord in 2nd inversion", I kinda wish I could summon up the appropriate auditory image in my head. But I understand him in general terms and think he's exactly on the mark with regard to what makes Crane's music so uniquely fascinating. You can hear references to the work of other composers, often subtle, sometimes not, but more, Crane creates note sequences whose essence you've heard hundreds of time yet, by paring away almost all ornamentation, they seem new and, more, one understands in a deeper way why they're so well-used and effective in the first place.

The pieces on this 2-disc set are performed by members of the ensemble Apartment House, for this recording: Andrew Sparling (clarinet), Alan Thomas (guitar), Nancy Ruffer (flutes), Phil;ip Thomas (piano), Anton Lukoszevieze )cello), Gordon Mackay (violin), Simon Limbrick (percussion), Sarah Walker (electric organ), Ruth Ehrlich (violin), Angharad Davies (violin)and Hilary Sturt (viola), with Crane himself contributing on "auxiliary instruments" for one work. The opening "Sparling" (heard in three variations) sets the tone: a two-note rising line on the reed played against three softly strummed chords on the guitar. Crane often writes lines in two, three or four note sequences. I found the former to be especially compelling, the weighing of one note against another; not really "against", but alongside, recognizing both affinities and separateness, a notion I've always found very appealing and meaningful, the back and forth between different vantages. I have the mental image of holding an object between thumb and two forefingers, looking at it with one eye, then the other, back and forth, shifting the hand slightly, noticing the varying play of light on the object as time passes. That's the kind of contemplative mood Crane's music immediately delivers for me. Skempton is an acknowledged influence and you can pick up hints of his approach on compositions like "Trio" though the allusions made by the older composer toward, among other traditions, British folk forms, have been whittled down to a "simple" three-note descending series played in gentle variations, set beside single, bright piano chords. It's gorgeous, certainly, but somehow manages to generate an aura of mystery as well, a sleight of hand so sleight you don't really register that it's occurring. I'm reluctant to just enumerate the pieces, but almost all of them are hard to pass by. "Raimondas Rumsas", so richly played by Lukoszevieze alone of cello, echoes Radigue perhaps but sped up (still quite slow), the four note sequence, shifting to three, deep in harmonics, utterly immersive, inviting a plunge into the instruments interior. I picked up a vestige or two of Bryars in the ensuing tracks and the general sound of Walker's organ in "Riis" recalls that of Riley, but the composition, with clarinet and cello as well, floats sublimely, the consonant organ chords acquiring a wonderful sour tinge now and then but also (a nod to Riley's early tape works?) coming and going in an abrupt, almost jagged manner; it's a fantastic, euphoric piece. Were I to pick a bone with Disc One, it might be that "Bobby J", for electric guitar, wanders too far into fuzzy, soft Frisellian territory for comfort, but that' a quibble.

So many other notable points: the sixth of "Seven Short Pieces"--again the series of two-notes, here against a steady background, so poignant. The sumptuous (and excellently titled) "Piano Piece no. 23 'Ethiopian Distance Runners'", whose ascending figure near the beginning is, in essence, something you've heard a thousand times in manifold songs--so familiar--but, for me, never quite so beautifully. The third of "Four Miniatures" makes a decided nod to Glass, perhaps a wry comment to those who label Crane's music minimalist; it's still fun. won't venture to speculate about the relationship of "Come back to the old specimen cabinet John Vigani, John Vigani Part 1" to the play or film we're thinking of (though I assume Crane is talking about this guy), but its a great piece with Sparling's mournful clarinet marking slow, seemingly more intuitive lines over the composer's clatter and dark electronics, though again that binary thing takes hold. Finally, "John White in Berlin" (love it) emerges from a hazy cloud with low cello drones and clear, shimmering piano chords, descends to a subterranean rumble. Soon the guitar comes forward with a similar four-note sequence (to the piano)--here, we encounter another trope Crane uses every so often: the gradual lengthening of otherwise similar phrases. There's a marvelous shifting of parts in play here, like a simplified kaleidoscope. Dreamlike, strange and lovely.

As I mentioned on an fb post recently, it's hard to imagine almost anyone, regardless of musical taste, not finding a great deal to enjoy in this recording. It's special, fine music and highly especially highly recommended for those who enjoy the more melodic branches of the Wandelweiser enclave as well as descendants of the Skempton/White approach to composing. Absolutely wonderful work.