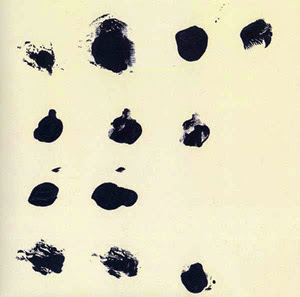 Meginsky's music, at least as represented herein, occupies an area that's fairly alien to me and, on the surface, isn't something I'd normally be drawn to and yet I fell right into its grasp. All electronics, almost all smooth and clean sounds chosen, it references beat-driven styles with seemingly regular rhythms, but they're overlaid in non-obvious patterns and use very different textures, resulting in a fine sense of space where the relative absence of grit and inexactitude don't bother me nearly as much as is often the case in work I've heard that's tangentially related. The elements themselves are quite pure and simple, nothing you haven't heard before, but they're arrayed in intersecting patterns that at times allow for multiple levels of parsing by one's aural sensibility while also on occasion overflowing into sensory overload that just takes over as at the end of Side A of this LP, where an insanely ringing tone lays waste to one's sense of equilibrium (I feel like I shouldn't be operating heavy equipment when listening to this). On Side B, matters begin to fracture subtly; the tones get a bit dirtier, the rhythms more stuttering. Though it never quite loses the rhythmic impetus, it continues to crumble, edging over into territory adjacent to the broken electronics work of people like Bonnie Jones. 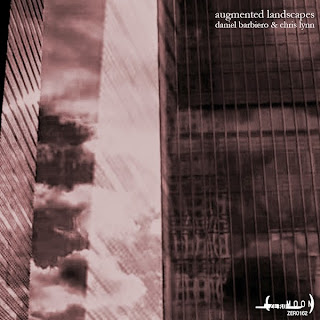 Another interesting recording from bassist Barbiero, here with Lynn providing field recordings. More, Barbiero (I believe) does some processing of his bass; one often hears both the acoustic sound and the enhanced one, each set among Lynn's recordings. The structures feel somewhat free, though more in a contemporary classical sense than a jazz one, Barbiero's approach stemming, to me, more from the Turetsky angle of attack, even if I pick up shades of jazz bassists hear and there as well. The forms and enhancements can be problematic as well, the former sometimes meandering a bit much, the latter (as on the second track, "A Delay in Sound") seeming to be more simply effects rather than having a real reason for being. What carries the recording is Barbiero's sensitivity and clear proficiency on his instrument; no matter what else, this is always something to hang onto and enjoy. When things work, as onthe final cut, "Prepared Chance" where the bass and recordings really seem to exist in the same landscape, the music as a whole is fine indeed. 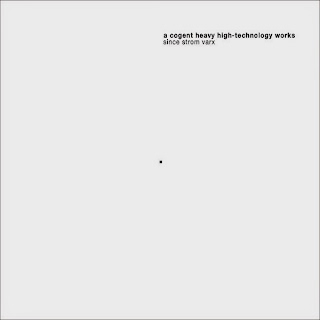 A new name to me and though his fact sheet sites collaborations with Yoshihide, Karkowski and others, my general impression of the music is more in line with an acousmatic approach filtered to some degree through the noise ethos of the last decade. A dense combination of multiple flutters, sloughed audio spirals and piercing zaps near the beginning, followed by a quieter, excessively (to my taste) spacey segment,though when it really dwindles down to dust, it's rather nice. The 66-minute track eventually emerges onto a broad plain suffused with organ-like tones amidst more abstract washes and vague, muffled bell tones, likely my favorite portion of the work; I was pleased Varx carried it out until the end instead of reverting to a "climax" of some sort. So, half and half for me; the initial segments fall into that INA GRM-kind of sound that I find over-processed and all surface while much of the remaining is quite attractive. Well constructed throughout, fans of this end of electronic music might enjoy the sum total a bit more than me.