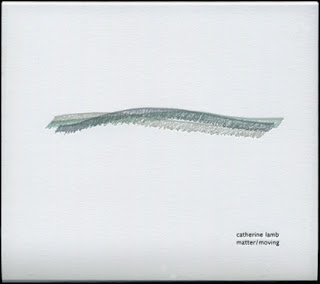 We're presented with four renditions of the fine piece, "matter/moving", spread over two cassettes (I listened via download), the performances recorded over two days in an apartment in Jackson Heights, Queens by Andrew Lafkas (double bass), Bryan Eubanks (oscillators) and Tucker Dulin (trombone). Lamb describes the process: "The environment outside is fluctuating, yet the quality is similar. The form and tonality within the piece remains the same in the four versions, but what occurs between form and articulation changes—in terms of the interaction of elements and grains of tones in moments of time. Through repetition of sympathetic resonances, overtime these tones interact more clearly and what at first is outside/inside becomes inside/outside."

The work consists of very subtle, long tones (you can view the score and instructions here) that gently interleave, sounds from outside drifting in, though there are also some very abrupt stoppages every so often that lend a nice stuttering quality to the music's shape. The playing is restrained and, like much of what I've heard from Lamb in other work, haunting and moving. Each version lasts about 23 minutes and I quickly gave up the game of attempting to discern variations (not that I was having much success) and simply sat back and let the sounds wash over me. I found that I enjoyed taking her instructions to the players a step further and listening with the door to the balcony open, letting the sounds of the 19th Arrondisement attain a co-equal level with the music, sometimes, as with a heavy rain shower, blanketing it. Very beautiful.

As is the recording in and of itself. Lamb has become one of my favorite working composers. "matter/moving" is a wonderful addition to her already impressive oeuvre. 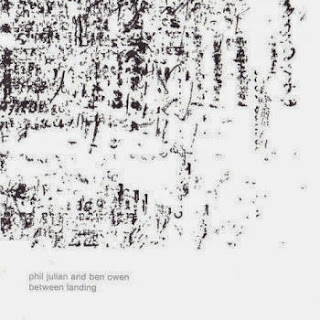 One of those recordings that I enjoy a great deal but find very difficult to write about even semi-coherently, that is in the sense of distinguishing it from other low level (for the most part) abstract electronics. True, the bell-like guitar tones with which it begins are somewhat singular--soft, suspended in pools of silence. But to say it's followed by a few minutes of quiet fizziness leads one down the path of simple descriptives which, in the case of a more tiresome release, might be the best you could do. But this one is far, far better than that. Three tracks, two variations of the disc title clocking in at about 21 minutes each and a third, "a return" occupying the final 14. The music, on the whole, is somewhat more aggressive than what I've heard before from Owen, a bit less so than my previous experience with Julian, a good balance. Apart from the few minutes at the beginning, the sound in "between landing 1" is spread in a consistent manner, even with something like an implied pulse beneath the washes of static and understated squalls. The second track lies more in a dense drone with affiliated clatter state, slowly undulating, descending into a deep rumble, the clatter growing more metallic, morphing into a more pinched whine--see, this gets nowhere. Suffice it to say that each piece is effortlessly engaging and absorbing, containing a strong sense of concentration and exploration (I will say that as much as I enjoy the first two pieces, the final is especially fine, a-bristle with a large number of wonderful textures and pulses). Can't ask for much more.

The Julian/Owen recording seems to be on Auditory Field Theory:

Did you know that you can create short urls with AdFly and receive cash for every visit to your short urls.