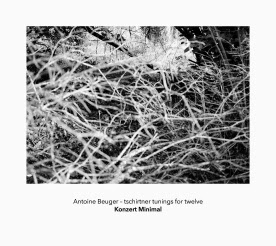 The second time I listened to Tschirtner Tunings, I turned the volume up a bit contrary to the instructions on the sleeve and then went into the bedroom to lie down and possibly take a nap. My head was about thirty-five feet from the speakers, down a hallway and around a corner but I could hear the music, at least when it swelled a bit. I lied there not only "trying" to listen, but placing myself in the situation (impossible to do) of not having known there was music emanating from the living room, wondering how I'd perceive these sounds, whether I'd somehow redefine them as issuing from various possible sources in the street or behind our building, of wind or rain. I drifted into brief episodes of sleep, awoke, listened, drifted off again. It was quite beautiful, otherworldly.

The name "Tschirtner" didn't ring any immediate bells but when I searched, I realized I'd often seen his work, though I remain uncertain (apart from, presumably, Beuger's admiration) of any direct relationship to the composition's structure. It's performed by the gradually mutating ensemble, Konzert Minimal, here comprised of Pierre Borel (alto saxophone), Lucio Capece (bass clarinet), Johnny Chang and Cat Lamb (violas), Hannes Lingens (accordion), Mike Majkowski, Koen Nutters and Derek Shirley (double basses), Morton J. Olsen (vibraphone), Nils Ostendorf (trumpet), Rishin Singh (trombone) and Michael Thieke (clarinet). Chang and Nutters provide an excellent detailed rundown of both the group and the piece on the Another Timbre site. It runs 79 minutes, and essentially consists of emergent, long lines,, each instrumentalist choosing when his or her sound appears during a given time frame--very "simple", but allowing of a huge range of variations. Not just the pitches chosen but, as is gone into in the interview, the grain and timbre of the instruments is foregrounded, yielding many, many combinations. Sometimes, one or two instruments overlap, often more. Of course, there are silences as well. As with almost all of Beuger's music, a sense of intense calm as well as respiration and appreciation of place is achieved. When not listening from another room, I've always left the door to the balcony open, allowing the sounds to freely mix with the street, weather, etc. outside.

Not sure if there's more to say. Another beautiful offering from Beuger, lovingly realized by Konzert Minimal. That's more than enough. 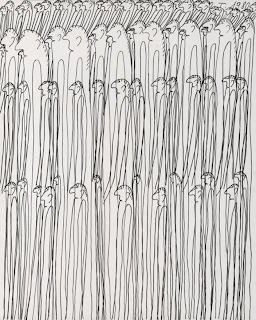