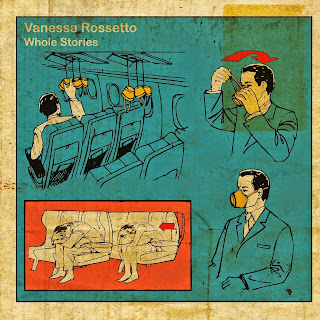 I have a fond memory of the day--what, some six years ago?--when a package arrived bearing three CDs in plain black sleeves from one Vanessa Rossetto. No idea what to expect but I was pretty well knocked out. Happier still, the ensuing years have seen nothing but massive strides forward in Rossetto's work and, for my money, "Whole Stories" reaches the high water mark thus far.

It's something of a story itself, compiled in New Orleans in 2012, Side A beginning and ending with the composer explaining what she's doing to some presumedly interested passer-by, followed by wafting and hurtling through the streets, encountering tales both sonic and explicitly biographical along the way, always with a stunning spatial sense and great affinity for aural richness and poignancy. Low, obscure rumbles segue into a trolley ride with an impatient conductor that in turn dissolves into agitated water (I think Rossetto's viola makes a submerged appearance in here somewhere and again on Side B), returning to that quieter zone, back onto the street for the bracketing conversation about field recording. Theres a wonderful sense of streamlining and purpose to the work; you know Rossetto spent massive amounts of time constructing this opus but he seams simply don't show.

As fine as Side A is, Side B is spectacular. Very much a story, centering around the life complaints of a middle-aged British-sounding woman, bemoaning her marriage ("I've had many wasted years.") to a companion only heard briefly (I don't think it sounds like Rossetto, though it could be; if not, I couldn't help being curious about the nature of the recording--eavesdropping on the next table?). This narrative, though, is embedded inside a sonic wonder world, buffeted around by an awesome array of (I assume) arcade game bells and beeps, more than a little Rileyesque at times. One way or another, there's always a constant sound in effect, often a strong hum (buttressed, I think, by the viola) imparting a continuo feel that really sends the piece cascading along, a truly rollicking ride, if you will. There is a bit of a sense of an amusement park ride, not really a contemporary house of suburban horrors because one feels that Rossetto has great empathy for the woman whose story unfolds in a fractured way. The occasional crescendi of bleeps is almost operatic at points, gorgeous in both sound and in implied commentary. There's a lovely, very quiet pause for about a minute, then the calliope sounds reemerge, rather joyously, nestled in crowd sounds, and a faintly heard Nawlins trumpet leads things out, with the companion stating, "People need to hear whole stories."

A fantastic recording; I've listened over and over for several days and can't get enough. I'm eagerly looking forward to new sound searches and collaborations.