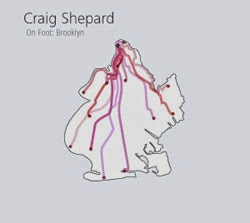 Shepard walks around, often traveling impressive distances, and composes music, generally playing on route. I had previously heard the excellent documentation of his perambulation through Switzerland in 2005, "On Foot", but in 2012, he chose to navigate far more dangerous territory, namely Brooklyn, doing so for thirteen weeks, penning a composition per week and organizing on-site performances of same by varied musicians which are heard here, usually along with the environmental sounds at the locations.

Shepard's pieces tend to be melodic--quite delicate and almost traditionally beautiful, as is the case on the opening track from Sheepshead Bay, played by Katie Porter (clarinet) and Devin Maxwell (snare drum), which emerges from the heavy traffic and sidewalk chatter, the drum in quasi-military roll state, the reed beautifully forlorn and wistful. Wonderful on its own, it blends with the street noise in a really lovely manner, especially pitting its calm sadness against the roiling, almost aggressive nature of the ambient sound. The exception to the works being embedded in the exterior world is the following track, via Canarsie, performed by Maxwell on glockenspiel, again a rather straightforward near-melody, with ample silence, the honeyed-metal notes allowed to suspend; you might imagine primo Bryars, but better. A trip to Coney Island brings out Jack Callahan (melodica, triangle), Erik Carlson (violin), Nick Didkovsky (electric guitar), Dan Joseph (hammer dulcimer), Larry Polansky (electric guitar) and Matthew Schumer (baritone saxophone) to play a sparser composition, various instruments appearing, playing a bit of a plaintive melody, then being submerged. We transition to Red Hook for the lengthiest work, played here by a saxophone trio with Schumer, Kristin McKeon (alto) and Erin Rogers (tenor). Here, the atmosphere is more Wandelweiserian in character, longish single-note lines floating quietly to the fore, receding. The field recordings do the same, being prominent at first (an overhead subway?), disappearing entirely for several minutes, returning with children playing, the saxophone lines gently encircling them, wafting through the games. It's a supremely calm, gorgeous work, very firm in its identity, very open to sharing that identity with its surroundings. Lastly, Callahan returns wielding bottles, ensconced in a piece written in that ancient land of hipsters, Williamsburg (field recording from the somewhat recent--though surely already passé?--scene, my ancestral homeland, Greenpoint). Much dense noise, difficult to source, the bottled, blown, entering amidst, sounding almost random, as though a vessel was at the proper angle for a stiff wind to generate the deep tone.

An altogether marvelous recording, true, pure and immersive. Hear it.