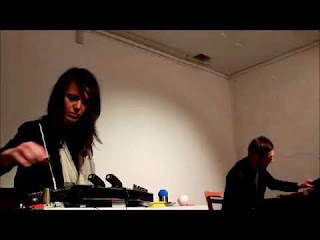 A live date from late March of this year with Lazaridou-Chatzigoga on her zither and Wastell, for this session, wielding electronics, bowls and shruti box. It begins more stridently than one might expect. Long lines are in place but there are several minutes of bracing harshness amidst the buzz, an almost Rowe-ian feel to the attack. After a short time, the music settles into an interesting place that it occupies for a good while: a thin but multi-layered hum augmented by sporadic bursts (no idea as to the source) that are vaguely Morse Code-like in nature. One gets the inkling, soon confirmed, that the entire 27-minute performance (perfect length) is a decrescendo, a kind of gradual deflation. It's a very endearing, unusual kind of stasis. Eventually, we hear a few cascades of clear zither and soon thereafter, matters contract to an even narrower range, The shruti box makes its presence known, a single, drawn-out chord, accompanied by a high, sine-like tone and, a bit later, some delicate tinkling, a sort of agitated calm that's quite moving. 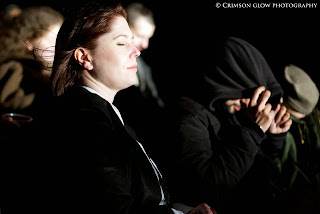 As I was listening to the above and writing the review, this Brassier/Mattin item arrived, also on Confront. Normally, I let new releases gestate a while, get used to them, etc. But I thought I'd write about this one as I listen for the first time. Seems appropriate (the above image is simply the first that showed up when I image-googled "mattin ray brassier"--the package is a Confront metal box, as is the previous release).

So. Almost nothing, a bump maybe. A cough. Three minutes in, hints of activity, still obscure. Wondering if Brassier will play guitar or maybe read. Heavy rain outside, possibly blanketing any sounds from the speakers. Huh, there's also a low spattering hiss (from the disc) that's not entirely unlike the rain hitting the porch. I've raised the volume a good bit, reluctantly, anticipating damage to my ears within a few minutes, but that brief emergence of sound has subsided back into the occasional cough. ok, there you go. A loud-ish, electronic throb, possibly vocal in origin, appears for ten or so seconds. Back to the coughs.This was recorded in April 2013 in Glasgow. I'm making my first trip to Scotland in a couple of days, so haven't experienced the weather yet, but I'm imagining frigid temperatures and phlegmy throats. Very phlegmy. ooh, bee-like activity, maybe sampled strings, looped, segueing into dense traffic (coughers thus given license to let go, which they do). At this point, I'm enjoying what I perceive as the structure, though that's obviously still subject to change. There's a strong feeling of presence in space, as well, always appreciated. Voices embedded in the roar (which, I now think, isn't traffic at all), murky, indecipherable. As that roar ends, I'm thinking those voices are from people in the performance space, presumably "improvised". :-) A device is turned on, an engine of some kind perhaps, though it escalates into a very loud alarm-like whine. I've just located a series of photos taken at the event, some of which show a large fan, wondering if that's what I'm hearing. If the woman in the photo above is an indication, probably so. (here). Also note that the performance site is "tramway" and am not sure if that's the name of a space or an actual tramway. Something like that initial vocal throb recurs, hanging around for a while this time, maybe a minute. [out on the porch for a minute to inspect some cool looking clouds, disc sounds continued. Questioning the recording of this, as opposed to the direct experience, but that's an old one...] Wait. an electronic Donald Duck voice is reading, I'm guessing from Brassier. [took a couple of photos of aforementioned clouds]. The voice is intelligible but distorted, the content thus abstracted enough to be more easily heard as noise. It ends abruptly, the engine turns back on. 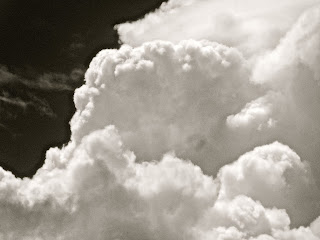 Back to ancillary noises, minimal. Wondering...oh, there you go, applause (weirdly inappropriate somehow) at the 34-minute mark. I was just going to say that I appreciate not having track timings in place as, the first time through, it imparts more of a sense of being at the concert, not knowing how long it will last. I had just been wondering, while imagining the set, how they'd choose to end it. I'm still not sure, having only audio clues to work with. Curious if they'd been off-stage for a while. No matter, I suppose.

For what it's worth I enjoyed the disc, was never bored, found it workable to both listen and pay attention to the small things around my table.