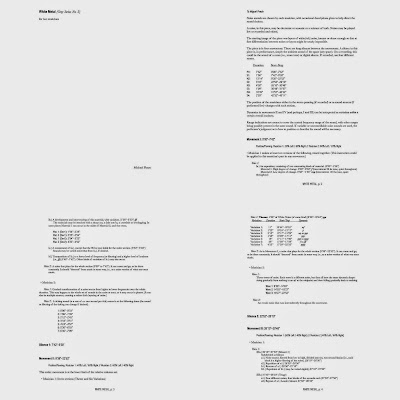 Where to begin? As a rule, I love seeing the scores to Pisaro's work, either before or after hearing a performance. There's always so much more going on than I can usually apprehend (consciously) while experiencing them. Here, the score, six pages not counting the title sheet, is printed right on the LP sleeve. As well, there's a card inserted inside the sleeve containing notes by Prado that further explicate this particular realization of the piece. But there are so many layers of complexity, technical and conceptual, that "following along" is a daunting task and ultimately, I think, less worthwhile than simply understanding that this massive, intricate framework does exist but, like pixels in a newspaper photo, you needn't concern yourself directly with it--but you shouldn't forget it either.

The title, "White Metal", necessarily calls to mind both Black Metal and White Noise and Prado goes into that a bit in his notes. While the latter, via the variety of sound sources used here, makes itself known (not always, by any means, as recognizable sounds also intrude), I don't particularly pick up any overt references to the former, though perhaps that's due to my relative lack of knowledge about the genre. For that matter, despite knowing the work decently, I don't hear the structural references to Mozart's 40th Symphony which apparently are also in play--I imagine there's a great deal I'm missing here. But still--it's a thrilling, challenging and fantastic experience. Pisaro, as is his wont, uses clock time as a lattice for the two musicians, each assuming two "voices" (three in the final section), to append their contributions, arraying the durations to overlap in a huge number of patterns. Sometimes these durations are for the length of the movement, other times they're as brief as two seconds. As usual, he also allows for some latitude and, as ever, this elicits a strong desire to hear other realizations of this project. Additionally, stereo panning is in effect so, as I understand it, we're hearing more or less of a given musician's sounds over the course of the work's four movements, one more "wave" that flows underneath the surface elements, shifting them in a very subtle manner. And, to be sure, there are silences, four of them of varying lengths, though at least as far as I hear on the LP at hand, there exist soft, irregular (not in line with the disc's rotation) patches of sound to be discerned during these periods; not certain if that's an artifact of the vinyl itself, though I expect it is. And that's fine! :-)

Just sitting back and letting the music flow over you, intuiting the architecture, wading through all these variations of white noise, is a wonderful experience. The first movement contains several washes of near-tonal content (if some actual shards of Black Metal have been extracted for use here, I'm guessing that's one of the places they might be) as well as a series of clicks, enabling it to serve as a kind of entryway to the remainder of the work wherein those kinds of ready handholds, while still popping up now and then (some quasi-tonality, recordings of ocean waves, a rocket countdown) grow more vague, enveloped by other more abstract noises. Just let the piece establish its own strange, obsessive logic, the myriad minuscule segments disappearing into the whole. Even then, because of its prismatic complexity, it sounds very different on each re-hearing. Or, rather, I pick up different aspects, assign more aural weight to one part than another; shifting, always shifting. Endlessly fascinating, one of my favorite releases this year, excellent actualization by Pisaro and Prado.