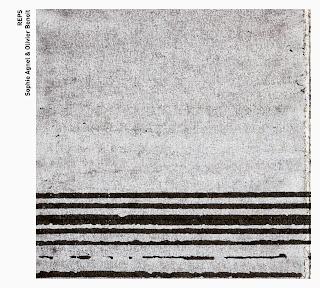 I'd been only minimally familiar with Agnel's work, probably not much other than the Potlatch release with Lionel Marchetti and Jérôme Noetinger, 'Rouge Gris Bruit', from 2001 and the beautiful recording on Another Timbre, 'Spiral Inputs', with Bertrand Gauguet and Andrea Neumann, prior to hearing her perform at the Nya Perspektiv festival in Västerås, Sweden in 2012, which was something of a revelation. To unfairly encapsulate my impression, it was like someone channeling a healthy dose of Rzewski through free improv/post-Cage territory, both sonically bracing and emotionally moving. I've unfortunately managed to miss catching her in concert here, since my arrival in Paris (including a set with Michel Doneda last week on the same evening as the Diatribes show). My experience with Benoit's music hasn't been quite as enticing, including several jazz-rockish ventures on the Circum-Disc label that I never warmed up to.

So I'm happy to report that 'REPS' both enhances my appreciation of Agnel and also causes me to reappraise Benoit. Two medium length improvisations, about 18 and 15 minutes long, recorded in 2011. The first launches immediately into a motoric figure by Agnel (prepared piano, a clanking of sorts heard in the strings) accompanied by splintered lines from Benoit, harsh but with an underlying tonality suggestive of, say, Sharrock. This kind of piano approach, as mentioned above, almost automatically catapults me into a "Winnsboro Cottonmill Blues" (Rzewski) frame of mind, but splayed out a bit, leaking into adjacent, more contemporary areas. Agnel has strong tonal streak as well, a lovely sense of tone that constantly merges from the buzzes and clatters of the stringboard accoutrements, as well as a strong, though subtle, rhythmic sensibility. Admittedly, I hear mush of the music herein as emanating from her, with Benoit very ably accompanying, which I'm sure isn't truly the case. The guitarist eschews the kind of Rypdalian motifs I've heard before, navigating areas perhaps a few steps removed from noise (toward tonality) but never edging over into too easy offsets to the piano. The first track drifts from highly charged portions to dreamier ones, several times, managing to skirt any overtly free jazz idioms in favor of a kind of "free classical" environment and finding a wealth of material to work with there, really something of a different niche, very rich. When some deep chords on both instruments emerge some 2/3 of the way through, the effect is quite dramatic and and gratifying (and also reinforces the duo nature of the piece). A very fine mini-epic, this one.

The second cut opens in sparser climes with more of a scratchy, euro free improv feeling. Soon, though, one of those urgent rhythmic kernels appears, dark and chunky, leading the music into a swirling torrent, Benoit rubbing and chafing, that rushes into an intense, throbbing bit of chaos. As with the previous improvisation, it hurtles from place to place without any sense of purposelessness, each section naturally ensuing and the whole forming a coherent (at least in retrospect) structure; very satisfying, ultimately evaporating in a way that, in context, is unexpectedly lovely.

A strong, rather unique offering, well worth hunting down and hearing.