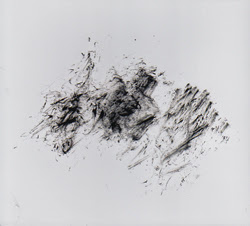 I'd heard Loriot on a couple of Creative Sources discs but had my strongest impression of his playing shortly after I arrived here in Paris when I caught a very fine performance of his viola duo with Cyprien Busolini at Les Instants Chavirés. I nonetheless had, for some reasons (including the label), expectations that this set would veer more to the efi end of things but by and large, this isn't the case, happily.

"Sirens" features dry, bowed strings, high-pitched but calmly played, over brushes, the latter imparting tinges of a jazz feel more of a soft tumbling effect, percolating under the held tones. Things grow more active and, indeed, I thought for awhile that my suspicions were justified as the music becomes more about the sawing/rubbing effects of the strings than of a sustained idea. This begins to be remedied in "Miasmata", a delicate and mysterious piece of small sounds, unhurried and slightly foggy, with low drum taps feeling there way through the haze, bowed bells (?) providing glimmers of light. It too grows a bit more active than needed toward the end but it's a step (for me) in the right direction, to a goal reached in third and longest track, and my favorite, "The Burial of Memories". Here, the trio remains consistent, sticking with the "groove" (very high, scratchy bass scrabblings, nervous, high viola pluckings and agitated, thin percussion) fora good while, transitioning into a similarly toned, more percussive area. Roiling yes, but never over-busy, instead creating a prickly carpet that ably covers all of its 18 minutes plus, very nice. The cover image isn't a bad analogy. The final piece stays in that gently ringing percussive zone (through much of this, oddly, I though that the music was often something Roscoe Mitchell could have done but never did, this track included), soft and restrained, the sounds well spaced and just varied enough.

A good recording--I'll be curious to see if they move on from this.