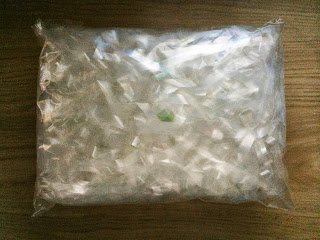 When Richard Pinnell posted the above image on his facebook page, I noticed it but didn't follow the ensuing thread. So, a few days later, when I received in the mail a box that seemed suspiciously light for its size (about 10 x 8 x 4 inches), I'd no particular idea what it contained. I would have had less of an idea, I guess, had not French Customs (Douane) stabbed it with some sharp instrument, puncturing the "pillow" within and freeing roughly a million shards of thin, plastic ribbons from their cocoon. It took several seconds to realize that I wasn't dealing with "packing" materials but with (disfigured) packaging, during which time the static-adhesive, lighter than air bits had strewn themselves happily around my entrance hallway; two weeks later, I'm still finding their descendants when the light is right....Instead of being sustained inside this cellule, the 3-inch disc and accompanying card (black print on clear plastic) had burrowed their way to the box's depths.

Ah yes, there's music involved as well, a 2011 recording with "snare + preparations". Golbenkoglu has produced challenging work before; this is either more of the same or a not terribly interesting (to me) performance. It's highly abstracted, set out in slight dabs and pieces, sounding as though recorded from a distance. There are times when I get a Twombly-like feeling that's very beautiful in a way but other times the music crosses the line that Twombly navigates so well, into an arbitrariness that drifts uncomfortably, though I could easily imagine that being the point. It also makes me wonder about the package, of all the excessive cello-fluff, about the purposeful inconvenience and encumbrance, the "with hidden noise" aspect, etc. Even its elements, plastic and colorless (save for what it reflects), dissimilar to (I'm also forced to consider) Meehan's "Sectors (for Constant)" that inherently absorbing and gorgeous object still resting against the wall, unopened, in front of me. Knowing (or thinking) that Meehan's music contained therein is likely to be more to my liking than this but choosing not to listen whereas, even if the choice hadn't been made for me by the curious customs official, I've no doubt I would have opened it, essentially negating the care (and purpose?) Golbenkoglu had in so packaging his work.

Listening to the music a few more times, its remoteness, which leads you to hear it as though from an adjoining room, is rather effective. Still, it's hard to reconcile with the whys of its form of delivery. Maybe a joke, but I imagine not. Maybe an elaborateness/simplicity (rawness, brutalism) dichotomy. It's in an edition of only 50, so there may not be a way to find out for yourselves and I'm unable to locate anything on-line to aid your search. Good luck.