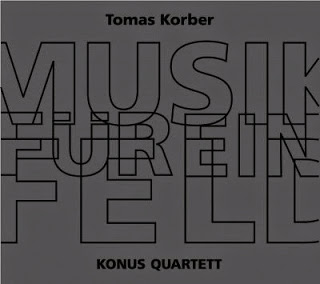 The work is defined by fairly clear sections and, through its 67 minutes, retains something of an "epic" quality, a largeness that I've heard previously in much of Korber's music. It begins with a hushed chorus of breath sounds, originally from the reeds but processed enough that the balance between acoustic and electric is pretty close. They come in slow, quiet wavelets at first, gradually coalescing and increasing in intensity, pure tones (saxophone or sine, hard to tell, perhaps a combination) surfacing now and again, ultimately rising to a small storm that terminates abruptly about thirteen minutes in; one then hears the pure (and lush) sine tones that have been lurking around underneath, probably for quite a while. There follows several minutes of some of the most beautiful sineage I've heard in a long time. This sine chorale also cuts off very sharply, replaced by a single, thinner tone, sounding isolated in space after the preceding. It's soon joined by a quavering, equally thin saxophone and the music again begins to slowly spread out, but in a different direction than before, reedy flutters and controlled buzz-tones flitting through, like bees threading their way through raindrops (the sines); striking music. Korber keeps re-imagining the playing field, managing to shift course while implying the form of a larger structure, an impressive feat. This includes blocks of silence two or three minutes duration that really have a strong feeling of solidity, like a transparent building block.

A fascinating sequence of short, harsh breaths (saxophonic) that end, whether acoustic or electronically generated I'm not sure, in a sound like a tiny cascade of minuscule pebbles tumbling down a resonant surface. A quiet pool of enhanced burbles and burps, steamy exhalations and sines, their separatedness lending a Twombly-like aspect, leads to another swath of electronic richness bearing hints of attenuated bell tones. Pitches start to warp and you begin to get the impression that these are actually saxophone tones again; there's a lot of mirage play going on throughout. Agin silence, again perfectly placed. A lengthy, tonal wash spiced with quick gasps points toward the work's conclusion, the music expiring in a drawn out, soft hush recalling its beginning.

"Musik für ein Feld" is an extremely strong piece, confident and mature; I'm consistently surprised how rapidly it seems to pass, each of the segments feeling like a complete composition but still nestled into a very satisfying whole. Probably my favorite music yet from Korber, highly recommended.