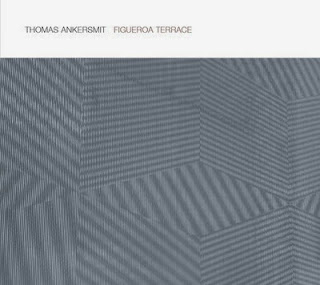 This is a truly fascinating disc, one of the strongest electronic pieces I've heard in a while. Ankersmit hasn't released so much in recent years (see in-depth interview here) so it's entirely possible that a work like "Figueroa Terrace" has been in the offing for a while, but it's still in some ways, in its structure particularly, as surprising as it is powerful.

Done with analog synths and contact mics (some technical details in the Touch link below), it opens with a far-more-complex-than-you-think-at-first, rapid fire line, like some mutant cousin of Radian. You initially think of the "medium" line, an intense (though icy-smooth) stream, but soon realize that there are all manner of adjacent sounds, low to high, buffeting it, propelling it forward. So ok, you think you have an idea where this is heading, perhaps an ever-expanding series of vectors, spanning out, overlapping, cresting, etc.; nice enough as is. But then.

A bit over three minutes in, the bottom drops out, absolutely falls. You're deposited in a place that, really, is just as active and even with its own sense of propulsion, but far thinner, the sounds all in the high/prickly range, individual grains, coalescing here and there like silt drifting toward a seabed. And the piece stays there for quite awhile, Ankersmit investigating the newfound abundance of lifeforms, generating remarkable variety using (seemingly) so little. A series of thunks and scratches, non-electronic sounding but probably so, pass through at one point, but the tidal shifts keep in character with the overall shimmering, glistening aspect. Slight, sandy rubbings beneath extraordinary high (and beautiful) glimmers (to take the underwater analogy perhaps too far, like phosphorescent plankton), soon underlined by a hyper-deep throb that passes by. Little by little, you get a sense of something developing and kind of a retrospective idea that this whole composition has had a destination all along, been more narrative than you thought. Layers of ringing tones are flitted through by wing flutters, gently herding things toward some end, heralded by a steady, hard pulse (I should pause and mention how entirely excellent virtually everything here sounds). There's another drastic shift at this point, a series of small static explosions and siren-like tones, several minutes of rich dronage, sparked with hiss and more static that ultimately locks into a kind of rhythm cycle, super dense with, a final surprise, a very plaintive "cry" atop. But this cry bears all sorts of connotations, from a lost animal to something of a blues feel, very surprising and extremely effective, strongly imparting the sense of having arrived somewhere and having a strangely emotional impact on the listener, at least this listener. More so, even, when it all gets cut off abruptly.

A seriously impressive work, very glad to have heard it. Do check it out.