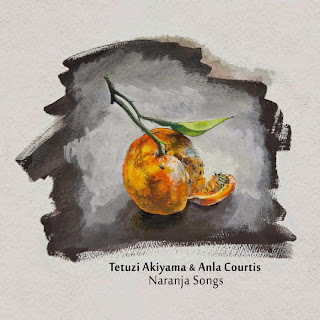 I don't know Courtis' work at all well enough to opine as to where "Naranja Songs" sits in his oeuvre but although I'm certain I've missed many an Akiyama release in recent years, I'll easy proffer the opinion that this is, by far, my favorite recording of his since "Relator". Recorded in 2008 but just now seeing the light of day, it consists of four pieces, improvisations on a pair of acoustic guitars that might be described as "pastoral" but that's far too banal and, really, inaccurate as, crucially, there's always an underlying sense of disturbance, of anxiety.

The first piece establishes the general mood that suffuses much of the album, spare but tonal--maybe think of Bailey at his most tranquil but also retaining a real interest in certain historical avenues of the guitar, particularly Spanish. Largely single notes, very conscious of space between the players, but also melancholy and, as said above, anxious, a truly delicious mix. I'm tempted to use the term, "meander", to describe its near-15 minute path, but without any of the pejorative implied--Akiyama and Courtis find something of value around every bend. The second track moves into slightly more abstract territory, bows of some sort (I think) being used, but that plaintive, essentially melodic character remains present, the cries underlined by nervous strummings, quite moving. The next returns to an area tangential to the first, a bit more rhythmic thrust, at times sounding not dissimilar to classic Gastr del Sol--wonderful buzz tones and cadences abound. The last cut again steers back into a more fragmented space, one of the musicians using some vibrating device on his strings, again enhancing that mood of disquiet. The plucked guitar reduces to almost nothing, acceding to the grind, wherein all that pent up anxiety is released with, happily, no reconciliation.

An excellent recording, well worth your time 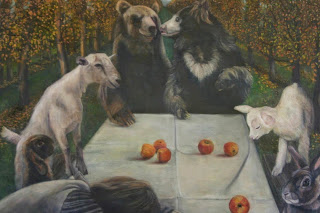 Finger is a Norwegian composer and DJ and "The Bet" is a collection of ten electronics pieces, in an accessible, psychedelic vein that recall, among others, Fennesz, Hoahio, various minimalists and, I guess inevitably, Eno. The settings are lush, often using echoey keyboards that play simple, brief phrases over a moist, luminous background wherein dwell disembodied voices (Inga-Lill Farstad and Linn Fister) that suffuse the air amidst glitchy crackles. The pulses are languid, sinking in the forest of echoes. Guitar appears on occasion, gentle, and there's cello throughout (Elling Finnanger Snofugl) though it tends to recede into the overall ambience as do the field recordings that surface now and again. The abundance of ancillary sounds ameliorates the general sweetness a fair amount though, overall, the smoothness and blurred quality could use a healthy dose of harshness; the penultimate track, "Care in Motion", begins to get there, though the echoes, by this point, have outstayed their welcome. Listeners who enjoy bathing in Fenneszian sumptuousness will find much to enjoy, as the production values are high and the sounds do a good job summoning up images out of a Klarwein painting.