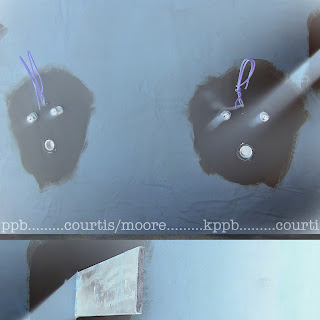 [Courtis uses both Alan and Anla in different situations; I've yet to discern a pattern. This release simply says "A. Courtis", hence the above option for either]

When Reynols became popular in eai circles (around ten years ago?), I remember giving a listen or two but never delving into the band's music. So when Courtis sent over a couple of things last year, his music was, for me, quite fresh. I was then able to see this duo perform at Instants Chavirés in March and found myself enjoying it very much, especially considering the "envelope" it occupied which, had it been described to me, I don't think would have upped my enthusiasm too much. Moore, who's best known for his work with Volcano the Bear (another band with which I'm unfamiliar) is an exceedingly powerful drummer; I was reminded a bit of Will Guthrie in terms of total command of the basic rock/jazz drum set. He acted as something of a foil for Courtis, who played/sung very freely, anarchically if you will, sometimes summoning up rockish modes, more often noise and, on occasion whimsy (like hanging his boot on one of Moore's cymbal stands and playing it). It managed to work, really feeling "free" in a good way, perhaps even more so after a rather "official" (in an INA GRM-y way) set from Lionel Marchetti and Jerome Noetinger. So I looked very much forward to hearing how the pair would translate to disc.

The first thing I noticed is how much more concise the music is,very much structured in episodes that have at least a tinge of song form. There are two tracks, bearing titles that somehow summon up memories of Last Exit ("King Pancresa", "Punk Butter"), Courtis and Moore responsible for the organization of one each, recorded in Buenos Aires and Brooklyn. I'm not sure, but I think the music might have been done remotely by the musicians, constructed subsequently. Moore offers some strong drumming near the beginning, Courtis contributing fairly gentle loops and other electronics; even the cymbal bowing and such is never very harsh. Some six minutes into the first track, very lovely, vaguely Hawaiian-sounding guitar strumming emerges over a wash of cymbals, very "pretty" without succumbing to sentiment. If there's a generally detectable influence here, I think it might be the Canterbury scene, specifically Henry Cow and, as when a pale voice enters over echoey piano toward the end of "King Pancreas", Robert Wyatt. Comforting mbiras close out the track and lead directly into the balafon-like sounds and loose, rattling string plucks of the second. Taking its time, it meanders from scene to scene, softening as it goes, quiet backwards tapes and tinkles wandering into a accordion (bandoneon?) patch, finally concluding with rolling drums, layers of percussion and scattered noise.