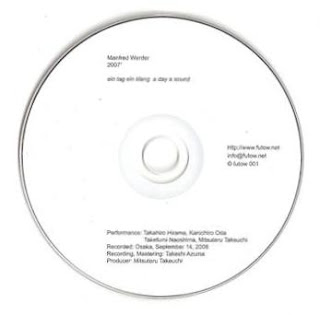 Baffling, in a number of ways. Apparently performed by a quartet of Japanese musicians (Takahiro Hirama, Kanichiro Oda, Takefumi Naoshima and, Mitsuteru Takeuchi), the score consists of the single line, in German and English, "ein tag ein kling a day a sound", the accompanying text covering several issues, concluding with the line, "Trace elements of a world".

What one hears, for some 67 minutes are field recordings, presumably at least four such given the number of participants, though whether overlaid or positioned one after another, I'm not sure. Perhaps if one experienced this in the middle of some space, the diverse recordings emanating from each side, the effect might be subtly disorienting. On a home system, though, one "simply" hears urban sounds, not very abrasive, wafting by. You do seem to be mobile, the alteration of the soundscape seeming to have more to do with your position within it than it's own changing. It's very pleasant, even comforting and lulling. I have to assume, if only due to the purported number of people involved, it's something I couldn't hear on my own, at a given time, but that's indeed what I do feel. Perhaps that's the composition's virtue, that only such a multi-layering can begin to approximate what our ears pick up.

Available in the US via erstdist 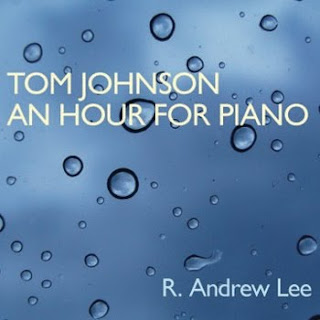 I've had and enjoyed the original version, performed by Frederic Rzewski in 1979 (the work was composed in 1973) and issued on Lovely Music Ltd. for some time now. When I'd think of it, I'd idly wonder why (to the best of my knowledge) it hadn't become something of a standard work in the post-Minimalist repertoire. It's bright and even flashy while at the same time possessing a knotty structure that gives lie to it's surface sheen. Maybe that's the problem--it's really not as picturesque as it appears on initial hearing. This rendition by R. Andrew Lee, who teaches at Avila University in Missouri, approaches the work a shade or two more gently than Rzewski (not surprising, given the latter's forged steel attack), allowing the notes a fraction of a second to suspend in space, which in turn may allow the listener an extra glimpse into the underlying mechanics.

Johnson skirts the boundaries of a few adjacent territories, making the work frustrating on one level but more deeply satisfying on another. It has a strong patina of minimalism, but is never as rigorous as early Glass or Reich, nodding both to La Monte Young on the one hand and composers like Rzewski and even Christian Wolff on the other. Even when the kernel of a section repeats for several minutes, there's substantial variation just under the surface as well as, often, a noticeable emotional aspect, often of sadness or somberness. Johnson likes irritating his audience on occasion; here he does so subtly, aiming for listeners attuned to early Minimalism, enticing them in and serving something with a slightly different taste.

A fine piece of music, excellently performed by Lee. 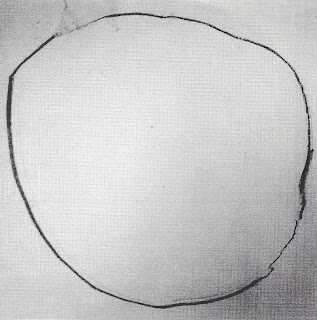 All I can tell you about oier i.a. is clear from the disc's title: that he hails from Basque country. The music is some 42 minutes of, more or less, the same set of sounds, which are of an insectile character, though I doubt sourced from actual bugs (though, who knows?). There are several layers, including two or three types of buzzing right about in mosquito-in-your-ear range, as well as a good measure of vinyl-esque pops and crackles and a distant, metallic echoing tone. It doesn't alter very much over its course; it actually sounds objectively repetitive though the mixture of sounds is complex enough that I was never sure if this was the case. For all that, there's something enticing about it, as though you're being lured into some alien hive---dangerous looking but the walls are coated with sweet honey, so how bad could it be? The volume increases a little bit as it burrows on, that metallic tone morphing into something more organ-y and overt; just before you're about to fall into the nest...it stops.