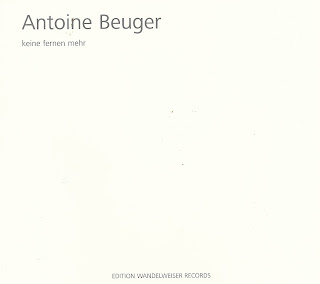 heavenly blue in my garden

they, at least, unchanged

These lines, by Amy Lowell, are the sole adornment, in English and German, for this release and one is tempted to leave it at that. Once again, Richard has done a fine job writing about this music and it's tough to think of much to add.

Two discs, 17 tracks per disc, just whistling, never remotely pyrotechnic, always with substantial breath in the tone, emerging from the very audible hum of the room, subsiding back into it. Slow, hints of melody but, fundamentally, the kind of things you'd whistle to yourself when deeply thinking of matters, perhaps not even realizing you're whistling. It's so personal, in a way, yet you don't (at least I don't) have any uncomfortable feeling of eavesdropping. Beuger is a flutist and his intonation is precise even as its character is blurred. There are silences between and among the pieces but they don't come across as compositional effects at all, more as pauses while Beuger concentrates on what to "say" next. Maybe that's the thing: the sheer thoughtfulness expressed as music--just barely music, perhaps, but music. And generosity in sharing it.

It's very moving. In fact, it's an especially clear example of how this music (generally speaking, both Beuger's, the other Wandelweiser composers and, by extension, post-Cageian eai musicians as well) can achieve a level of profundity and serious emotion that is painfully absent elsewhere. This, Frey's "weites land, tiefe zeit" (of which more later) and much of Pisaro's recent work, among others, have reached this stratum, for which listeners should be extremely grateful. It doesn't happen so often.

thanks, brian.
your review really touched me.