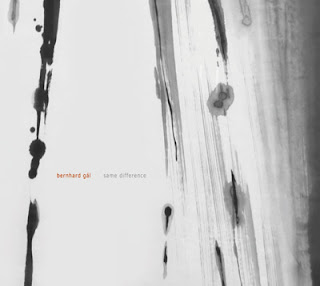 Even when I haven't been entirely convinced, I've always found Bernhard Gál's music (or installation recordings) fascinating as they seem to exist on a relatively unoccupied border between eai and more formal music. That isn't to say others don't wander similar boundaries, just not the particular ones he does; there's always something unique about his approach.

On "Same Difference", Gál post-assembles (the pieces date back as far as 2001) a suite that focuses on his love of "East Asian perspectives". There are five brief cuts serving as transitions between the longer ones, the five concentrating on spoken word (Chinese) and/or field recordings. The two longest tracks are "xuan zhuan", a haunting piece for singing wine glasses and bowed crotales and "uh-jeh-gal" for sheng, a mouth organ (Wu Wei), zheng, a kind of zither (Yeh Jiuan-Reng) and sound projection (Gál), a lovely, evocative work that wavers between traditional sounds and contemporary modes in a wonderfully unforced manner, dream-like yet touching earth now and then.

"e-musik" is a marvelous composition for solo acoustic guitar (Gál) wherein all strings are tuned pretty much to E's in different octaves. Here, the allusion to eastern musics is implicit, perhaps similar, in a sense, to the feeling one gets from Partch's kitharas. "vür fier" engages Franz Hautzinger (trumpet), Burkhard Stangl (guitar), Xu Fengxia (guzheng), Wu Wei (sheng) and Xun (Chinese ocarina) in a cross-cultural dynamic with a written score allowing for individual choices of iteration. It's a rocky but rich meeting, interesting sequences of odd sound combinations, a beautiful solo ocarina moment and rougher collisions--a very solid and nutritious 4 1/2 minutes. "Of Sound and Time" is a complex piece involving a rotating deployment of Chinese instruments in a live space as well as three musicians secreted in the audience, asked to make typical audience noises (coughs, cell phone rings, turning of program pages, etc.) during the performance. Again, the balance between (very) traditional approaches and a modern structure makes for a fine tension. "UTOO" enlists the Ensemble Noamnesia, an octet conducted by Rei Hotoda, and asks the musicians to play along with a recording made in a Berlin subway, seeking resonances and other affinities. It works quite well and subtly, the ensemble taking on the character of the place, masquerading as alternate brake tones, PA announcements, engine hums, etc.

Finally, "In fusion" returns to the solo form with Gál this time availing himself of a koudi (Chinese bamboo whistle) and the sound of water thrown onto sauna stones. Soft but intense squeezed out whistles infiltrate a prominent background hum with occasional explosions of steam and a metallic tapping as of hot water pipes. It's gorgeous, personal, mysterious.

Each piece here is vibrant and strong in a different way and, too, they work very well as a suite, politely deferential to a tradition foreign to Gál but also questioning enough as to his relationship to it and it's the the Western sound world. "Same Difference" is my favorite work among that I've heard from him thus far.