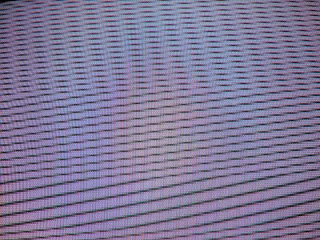 Some thoughts on Sunday evening's performance by Keith Rowe and Kjell Bjørgeengen at Experimental Intermedia.

Arriving for sound check around 3PM, the pair anticipated that there would be a number of monitors available but they were unsure about the amount, working condition, size, etc. There were a few in sight and scrounging around a back room uncovered a couple more, six in total. Some amount of time was devoted to orienting these monitors as well as the table upon which they would operate. Keith resisted Niblock's attempt to get them to set up more or less against the wall, preferring a more central position with the audience on all sides, perhaps with the monitors arrayed in a rough circle, facing outward. This arrangement looked awkward, however, especially given the bulky, rectangular nature of monitors (smaller, more lozenge-shaped ones might have handled this well). Ultimately, it was decided that the largest would be situated in the shallow, arched area on the main wall and the four medium sized ones would be placed atop the four speakers that generate XI's wonderful sound; two in the front (that is, behind the performers), two in the rear. The last, smallest monitor, was simply laid on the floor in front of the tables, at an angle, nicely offsetting the more rigid placement of the others. All monitors would show the same image.

It took a couple of hours to get all six functioning at once, largely due to erratic conditions encountered in the cables, but eventually the half-dozen monitors were flickering away. Then arose the question of seating, Phill suggesting the "normal" routine there (rows on two sides, the main one set facing the action), Keith immediately objecting, preferring that the seats be more or less randomly scattered about, the audience members encouraged to take it upon themselves to orient however they chose. Given that the visual element of the upcoming show (what would appear on the monitors, not what the two grizzled performers were doing) was central and that they were at widely spaced points in the room, this made sense to me. But there was a good bit of back and forth on this, a strong reluctance to cede such power to the audience! Keith won out, however, and soon chairs were strewn willy-nilly apart from an orderly bank near the entrance to accommodate latecomers. 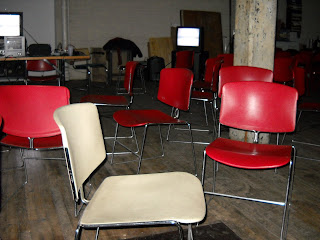 Keith would later observe (paraphrasing), "Now you would think that when an audience member arrives and sees the chairs arranged in this fashion, he would say to himself, 'What signal does this send insofar as how the performers think we should approach this event?'" But, no....As they trooped in (and it was, happily, a full house), most dutifully turned the chairs toward the table topped with mixing boards, loop stations and such, relegating the meat of the performance to the background.

(While, normally, watching musicians in this area do what they do isn't a major focus of mine, of course this can sometimes be quite enjoyable. The previous evening, when Keith played at Littlefield with Oren Ambarchi and Crys Cole [a fine set and I'd really like to hear more Cole] and having spent a good portion of the afternoon listening to him wax lyrical on "touch" as conveyed through the fingers of Clifford Curzon playing Mozart's 23rd Piano Concerto, K. 488, I derived great pleasure in focusing on Keith's own fingers as, with enormous grace and delicacy, they caressed his guitar-neck, stone, coiled metal scouring pad and butter knife.) 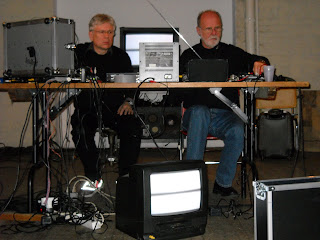 Seated in the rear, toward the left, Anne Guthrie and I turned our seats away from the protagonists, directly facing the nearest monitor (which, I was later told, might have luckily broadcast the best picture). Billy Gomberg and Richard Kammerman soon did likewise. I spent the entire show, some 40-45 minutes, looking into that screen, attempting as much as possible to immerse myself there, a very rewarding strategy for the most part, eye strain aside.

Both Keith and Kjell were looped to each other, Keith taping a couple of light sensors to a small monitor on their table, the sensors translating the flickers thus perceived into (don't ask me how) digital signals that modified the sounds emanating from his assortment of devices (no guitar neck). In turn, the sounds he created were fed into Kjell's system, altering the video output. Sometimes the affiliation between changes in sound or video was clear, often not. The video was entirely abstract and often flicker-imbued, the sounds generally harsh and, I think, not otherwise identifiable as "Roweian". At the most intense, the black and white flickering generated phantom colors (purples and yellows, for the most part, for me). [On Friday, I'd gotten a taste of where Kjell was traveling when, with he and Keith at MOMA, he searched out Paul Sharits' 1966 video, "Ray Gun Virus", a full-color affair that was similarly immersive and hallucinatory]. More, partly due to the flicker and partly, I think, to a layering of multiple images (sometimes sourced from oscillators) patterns emerged and subsided: single and double helices, all manner of wave forms, globules that were texturally differentiated from the base patterns, etc. Absolutely fascinating to simply lose oneself in, not knowing or caring which patterns were there in the monitor and which existed solely on my retinae. (which perhaps gets to another underlying idea for this duo, Zizek's distinction between reality and the Real, but I suppose that's another story....) 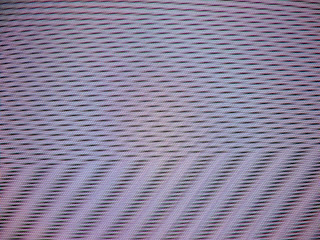 I didn't get there until around 6, but if I'd been there earlier, I would have told Keith that what he wanted to do with the seats wouldn't work in Phill's very unique space, for a bunch of reasons. my suggestion I think would have been that if they wanted people looking at the monitors and not them, then they should be hidden from the audience, not set up in the middle of the room, but again I don't know if that's possible in that room.

anyway, very powerful set, especially the latter half or so. at that point, a second area of music was introduced alongside the first, high pitches (some audible, some not) alongside the lower pitched drones, and the video became much more complex. Brian, the monitor you were focusing on was indeed the best of the five around the perimeter, and I also spent a good portion of the set turned that way and staring into that one (I was right 'behind' Billy), although I could only do it for a few minutes at a time.

glad I got to finally see this duo, this is Keith's most frequent working project currently, and they'll be playing in Paris again next week.

yeah, i generally am not that interested in video along with an audio concert, but the way this was done was really exciting. i did spend a good portion of the set looking at the players (though for no good reason as it was pretty dark and i really couldn't see what was going on from my vantage point) maybe just out of habit. good show, and great chats before and after as always.