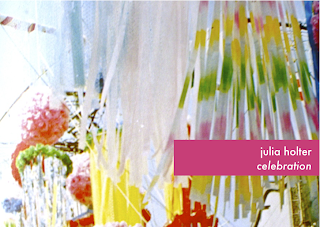 Few things better than hearing exciting music from a name entirely new to me. Holter is (or was) a student of Michael Pisaro and, while one can easily detect his influence, the best work here entirely bears her own stamp.

The first of three pieces, and the strongest, is a wonderful composition called "Bars in Afternoons" which, indeed, mixes site recordings from bars in Paris and Los Angeles, presumably in the afternoon, with Holter's piano (I'm guessing), weaving through the beginning and her singing at the end. The casual, ambient conversation has a luscious clarity to it, perhaps due to it's being offset against a more distant speaker through which later on, among others things, wafts Elton John. The piano is in mid-distance, almost taking on the role of one in a cocktail bar, except playing music that sounds like highly abstracted Satie. These three dimensions, the talk, the piped in music and the piano, create a very rich atmosphere, absolutely immersive. There's a brief smattering of birds, including gulls and one or two other intrusions of displaced sound. Eventually, some 12 minutes into the 15-minute piece, we arrive at the final section wherein Holter, almost as though taking "stage" in one of the bars, breaks out in forthright, multi-tracked song, a lovely, wistful number pleading, "Don't make me over." Something of a Lynchian moment, it works beautifully. One of the single best things I've heard this year.

"La Celebración" almost sounds as though recorded some warm night by hanging a mic from a window, muted bass throbs emanating from a neighbor's house, birds, airplanes, a freeway some distance away. About five minutes in, this nocturnal calm is interrupted by what I guess are firecrackers, though the sound is rather muffled and, had I not had the title as a clue, I might have guessed it was, I don't know, someone punching a large cardboard box. Soon, however, the streamers and fireworks make themselves known with clarity, bursting all across the soundscape. Then, back to calm. A nice enough piece, though there's something fragmentary about it, at least when compared to the prior track.

Lastly, there's a realization of Pisaro's "Harmony 17", with Holter on cello amidst the sounds of Union Station in Los Angeles. I've not seen the score but from what transpires here, it might be that the instrumentalist is asked to play very quietly for the first portion of the piece, more prominently in the middle section and quiet again toward the end. You can just hear the bowed cello near the beginning (unless I'm mistaking some regional hum for it, which is quite possible given Pisaro's penchant for lengthy silences to begin a piece), blending in with the airy sound of the large room. At seven minutes, the low arco tones become overt, though again (deliciously) sounding as though they could have emerged from engine vibrations, then recedes again. The entire piece dips out briefly about midway through its 34-minutes, resurfacing with cello upfront, still carrying that low drone. A naive young man strolls over, interested in what's occurring, claiming to be a bassist yet not recognizing the instrument Holter's playing. "That's, like a violin, right? Whoa, no, a violin is super-small, right?" Love it. And the work continues, the cello either extremely soft or not playing, then once again emerging, etc. the sounds of the station a constant, that initial soft hum reappearing.

A fine release, very happy to have heard it. 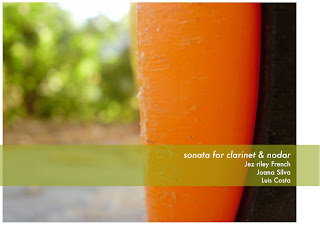 An interesting take on the integration of field recording and traditional music, a step or two away from the Rebecca Joy Sharp/Simon Whetham release on Gruenrekorder I wrote up a little while back. Here, clarinetist Joana Silva plays a composition by Henri Rabaud, "Solo de Concours", while walking through a rural landscape, dutifully followed by French and Costa recording her embedding therein. The clarinet doesn't appear until some 11 minutes in, but then occupies center stage, though Silva pauses often, allowing the landscape its say and drifts off into the distance on occasion. For myself, this is a case where being there was doubtless far more enchanting than listening to a recording of the event. I wasn't particularly taken with the Rabaud piece itself, but can imagine deriving enjoyment from the physicality of the experience, walking though glades, over streams, up hills, etc. while, in "3D", focusing on either the clarinet or the ambiance or both. On disc, that specific magic potential doesn't quite translate; one feels, more than usual, that something's missing, although I have to say the chain-saw encounter captures one's attention...