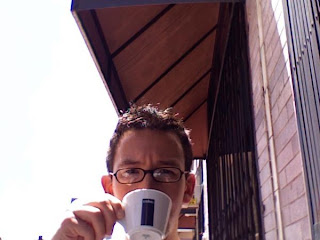 The foyer of the Presents Gallery on Washington St. in Brooklyn, just north of the Manhattan Bridge, served as the small, cold but perfectly fine setting for three (or four) pieces of music last evening that arose from Wandelweiser aesthetics. Two of the works were by former students of Michael Pisaro--Cat Lamb and Mark So--and one by Pisaro himself. And there was another one...

Cat Lamb's "nodes, various" (2010) began the evening, for three laptops (John P. Hastings, Michael V. Waller and G. Douglas Barrett (I didn't see the score but it presumably calls for performers with initials in their normally used monikers). They each produced quiet, very subtle drones that gently nudged and overlaid one another. It seemed to me that the often predominant one was mid-range with fainter high and low echoes, but that may have been a result of where I happened to be seated. The overlapping created a kind of sonic iridescence while at the same time having something of a chalky quality as though bits of each drone were being rubbed of and left on the other. Though they weren't pure signs, one could easily tilt one's head this was and that and significantly alter the relationships between them. Toward the conclusion a wonderful buzzing tone appeared for a minute or two before subsiding into a very low throb to end things. Nice work, though it perhaps went on longer than it needed to. Length, of course, seems almost de rigueur for the Wandelweiser (and, now, post-Wandelweiser) crew, generally a good thing but occasionally forced. To me it should take after good architecture: what's inside, the purpose of the building determines its size and shape.

Mark So's "Color of the sound waves [Ashbery series] (2007) was next, with Barry Chabala (laptop), Tucker Dulin (trombone) and Ben Owen (laptop) performing. It might be worth reproducing the text score:

[an open quiet room
[4 simple, sustaining sound sources spread out ont he edges of the room

each plays independently
making brief swells of sound lasting 3"-5" at a somewhat regular interval of 20"-40"
each swell barely emerging to audibility, then disappearing
free to coincide/overlap

Very, very quiet and lovely. Dulin played breath tones, single exhalations discreetly spaced out. Chabala, during the day, switched from his intended guitar to laptop, incorporating faint samples from the oeuvre of Don Van Vliet including, wisely, the snatch of field recording/eavesdropping heard at the end of "Hair Pie", with the distant barking dog and the opinions of the couple of kids passing by the studio, as well as part of "Well". What Owen was contributing, here as in the following piece, I could often not decipher! Which was fine, even appropriate, though sometimes I'd detect a tone I couldn't otherwise place and defaulted to crediting him. As the work begin, Barrett, who was seated adjacent to me, opened, rather noisily, a plastic bag and retrieved from it a container of yogurt and one of some granola-like substance, which he also opened with some amount of racket and consumed, washing it down with a pint of orange juice. For a minute or so, I confess to being slightly peeved at the rudeness but then, belatedly, rechecked the program and noticed that the work to be performed synchronously with the So composition was Adam Overton's "breakfast, lunch or dinner" (2009) and, correctly surmised that Barrett was enacting the first third of this piece. Excellent. The space wasn't without its exterior noise, including a slamming metal door from the next building down and, as it opened directly to the street, sidewalk chatter and automotive noises. I go back and forth as to whether I'd rather hear a composition like this in a pristine environment or not (it does, after all, request an "open , quiet room") but last night had no problem accommodating myself, allowing it to embed in the environment. Very enjoyable work--would love to hear more from So and, generally, am curious about what this next generation who've learned from Pisaro, Beuger, Frey, etc. will come up with.

The evening closed with Pisaro's "fields have ears (4)" (2010), with the previous trio augmented by Hastings on stones and dry leaf. The score calls for 17 sections of sound-making bracketed by 18 pillows of silence, the lengths of each ranging from 4 to 158 seconds. Within that framework, "the sounding sections should be just distinguishable from the silent sections". Moreover, each performer should avail him or herself of two kinds of sound, first deploying one, then the other over the course of the piece, though when to do so is up to them. There are further instructions but that's the gist of it. The work had a certain steady-state aspect as the quartet played, more or less, in unison during those "sounding sections", at least as far as I could tell. I happened to be seated facing Hastings, who began by softly rubbing a round stone some two inches in girth with a small dry leaf, a lovely sound. Some time into the piece, he laid the leaf down, picked up another stone and rubbed them, another delicious sound as anyone who's done the same knows (who hasn't?). Dulin again kept to breath tones, high up; what his shift was, I couldn't detect, nor, as mentioned above, could I often figure out what Owen was doing, not that either mattered. Chabala again, even more subtly, used Van Vliet as sonic material, beginning with a single tap, iterated (I forget the exact source), sidling over to the opening half-second or so of bass from "There Ain't No Santa Claus on the Evening Stage", formed into a mini-loop that imparted a shard of melody to the proceedings, though at low enough volume that you might think you were picking it up from the other side of the wall.

This was a far stricter piece, in a sense, than the So (pictured above, btw) and generated a different kind of meditative feeling, one involving clear, if varied, repetition. It was more difficult, in a way, not entirely allowing oneself total immersion as it triggered (at least in me) a counting reflex at first. I did manage to get past that, letting that sit in the background but it took some effort, which is great. The struggle to get there was worth it.

glad you enjoyed the show brian. i will confess to the same reaction to Doug's eating till i remembered that he was performing a piece!

Thanks Brian. I just want to add:

a surface
As intense and inquisitive as that of the sea.
– John Ashbery, “Written in the Dark”

-- also an important part of my score, much like the prospect of the room itself, which rehearses within itself something of the tensions that ultimately animate the action and experience of the piece. The simultaneity of Adam's piece gives an opportunity to see the roominess of the room from the outside, to give an external point of reference to the question, but the beauty of an idea like "room" or "sea" is that it's not a ruled space, only sort of like a horizon -- whatever happens just sort of tilts the azimuth. This is true enough, I think, whether Doug was doing Adam's piece, or simply eating breakfast (which he was also doing) -- often a great thing about Adam's work of this kind is you're not sure it was a piece until you find out later.