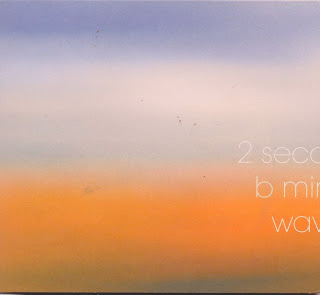 Short of Yuko Zama, I may have been trumpeting the hosannas about Michael Pisaro's music as much as anyone over the past couple of years so it's interesting, to me, that recent efforts have given me a little pause. Not so much, but some. The first two releases on Gravity Wave each had aspects that mildly gnawed at me, as does this one, the highly anticipated, long-range duo with Taku Sugimoto.

The pairing is an inspired idea, of course, given Sugimoto's music of the last six to eight years which, at times, out-wandelweisered Wandelweiser at least in terms of sparseness. Add to that the fact that, quite recently both he and Pisaro have allowed faint traces of melody and expansiveness into their playing and it would seem to be a perfect match. And it is quite wonderful in some ways. Those who have been pining for Sugimoto to take a baby step or two back to the realms so beautifully explored in "opposite" will be very pleased on that score alone while listeners who may have found Pisaro's compositions a tad too acerb (I'm not among them) will certainly appreciate the large amount of pure sonic gorgeousity on display here. Me, I find myself going back and forth, experiencing a certain degree of discomfort.

For those unaware, the deal for the recording was this: Pisaro sketched out three compositional ideas, each for a 20-minute duration and relayed them to Sugimoto. Knowing his scores, I'm sure that there were levels of complication that aren't necessarily directly perceived by the listener. The two musicians performed the works in isolation from each other and the results, à la MIMEO's "sight", were layered atop one another.

This works absolutely beautifully in the first piece, "2 seconds". I'm not at all sure what reins the title put on the performers--sometimes it seems a "2 second rule" of sorts is in effect but often not--but the (partially?) serendipitous effects of the sounds (ringing tones, wooden clicks (a metronome?), a door or drawer opening or closing, what sounds like a coffee grinder, etc.) all slide across and through each other, floating with a calm quasi-periodicity that's enchanting and stimulating. There's a kind of dust-motes-in-the-sunlight effect, quite wonderful. This piece ranks among my favorites in Pisaro's oeuvre.

The trouble begins on the second track, "b minor" which, oddly enough, is the one that'll cause Sugimoto nostalgics to drool. Two guitars, one assigned "melody" (Sugimoto, I believe), one "harmony" (Pisaro), I'm given to understand, though I've no idea what other rules are in effect. It's pretty. It's very pretty. And for four or five minutes, it floats rather well, serene and rosy. But all too soon, for my taste, it begins to cloy. That sense of miraculous discovery attained on the initial track, of being pleasantly surprised and/or irked by what wafts into you, is largely absent here. There's a hint, perhaps, in Pisaro's playing, of the Beefheart of "Peon" or "One Red Rose That I Mean" but splayed out. It's attractive enough but I'm not sure more than that; halfway through, I'm aching for some real-world reference, some grime. I don't necessarily experience that with much similarly scrubbed Wandelweiser material; perhaps it's the overripe rosiness here that creates that thirst.

The last piece, "wave", is problematic in a different way. It's composed of two elements (I think. As I know from experience, I often underestimate just how much is occurring in Pisaro's music): a steady, complex drone with an organ-like feel (Sugimoto) and "waves" of field recordings emerging and ebbing (Pisaro), said recordings sounding rather abstract, wind-sourced, I think, but I'm not sure. The former, the dronage, is utterly wonderful; I could listen to an hour of that in sheer bliss. But the site recordings strike me as intrusive and, often, awkward. as though they were something hastily tacked on to enhance the drone. There's an oil and water aspect to the combination, something I hadn't heard in other Pisaro works where two such sound worlds intersect (the "Transparent City" series, for instance). Intentional? Perhaps but it never quite clicked for me.

As with the Gravity Waves, don't get me wrong--this is a fine recording and that first track is entirely fantastic. It's just not the whole ball o' wax that one's first hearing of the participants and methodology might have led one to expect. Get it and decide for yourself, though.

wow, i am really as far away from your opinion of this one as i can be brian. i think it is pretty damn perfect. '2 seconds' we agree on. 'wave's sample is really well done and 'b minor' is fantastic. while you are done with it and looking beyond it for something else after a few minutes, i am loving the fantastic chordal melody Taku is playing and absolutely reveling in the tiny details that Pisaro's guitar part contains. maybe being a guitarist and knowing what was involved in the recording process gives me a different perspective? not sure, but i just love it.

So far I've only heard 'b minor' in its entirety, but I'm in agreement with Brian on this one. It's too sweet for my taste. But then although I'm a big fan of most of Michael's work, I never really liked Taku's 'beautiful' period, so perhaps it's not surprising.

But the audio samples of the other tracks are mouth-watering, so I'll order it for Christmas and see what I think.

An honest (and quite courageous) review.

I love divisive albums. It usually means that the work has content worth listening to and discussing and listening again (at least in this scene).

Personally, I've had this spinning almost constantly every morning, with exceptions. It's a beautiful set of recordings to listen to, maybe I'm just dealing with the materials that trouble Brian in a different manner. Yeah, I totally get the Sugimoto nostalgia in 'b minor' but I think Sugimoto is (or was) a fantastic guitarist and I'm giddy to hear him let loose on this kind of material (which I read as a kind of treaty between the styling on "opposite" and the "saritote" discs). and yeah I can easily hear this as too sweet & melodic, but there is a lot of music hovering around me these days that goes for easy beauty via melodies (not nearly as well-constructed as Sugimoto's progressions here) and just can't compare.

I do agree about the intrusiveness of the field/site recordings on "wave" - I don't think they are handled with the degree of sensitivity give to the of the materials on the other two pieces. I feel that here, the album's gambit doesn't work quite as well.

nice to see this, richard. listened to this whole cd again this morning. as discussed briefly in nyc, i'm pretty much on the same page as you with the second piece. interestingly, while i find your description of the final piece pretty accurate (including the use of the word "awkward"), i really like it. you didn't mention that the sounds are hard-panned, with the waves in the left and the e-bowed guitar (i think?) in the far right, making them resist true blending or merging. it's odd and weirdly brutalist, but i really think that works, especially after the too-pretty second piece. it's this real about-face away from prettiness or a consonant (in multiple senses) fit.

i agree that the first track is great - really interesting combination of sounds, and i keep finding more layers and levels. the mix is really interesting too - i assume it's a result of the methods, but you hear really dry, direct sounds plus some room tones, and varying distances between the mic and the metronomes and percussion. it's almost impossible to resolve into a real sonic picture of a space, which i like.

i think the second piece works for a while, particularly hearing the odd congruences in spacing and timing when you know how it was made (and i heard loren connors in the lead guitar part), but i did find myself getting bored of the unrelenting prettiness after a bit. at the same time, knowing that all the tracks are the same 20 minutes changes the feel of the piece - rather than going along for too long with the same material, they are filling a pre-determined canvass. you can also compare the subjective sense of time/length to the other pieces.

either way, a deceptively rich CD.

Yeah, I can see that way of looking at it, bot the last piece and the disc as a whole. I wouldn't be surprised to come back to this in some time and find I feel rather differently about it.

oh, man! i did not get the "tim" crack at first. . . sorry! weird. weirder still now that richard has reviewed this on the same day. yeesh! apologies for the mistake; good retort!

thanks for taking a crack at this, Brian, but strange that both you and Richard so fundamentally misunderstood how this project was put together, especially since I spelled it out really precisely in the PR. just for the sake of clarity, you wrote:

"For those unaware, the deal for the recording was this: Pisaro sketched out three compositional ideas, each for a 20-minute duration and relayed them to Sugimoto"

what actually happened was that the two discussed some general ideas for the three pieces, settled on them together, and then composed their pieces independently before overlaying them. the specifics, from the PR:

"2 seconds/b minor/wave is a long distance collaboration, with each musician composing and recording their own parts, before hearing what the other had done. Pulse, pitch and wave were the three areas they wanted to explore on the three pieces, and loose rules/guidelines were agreed on beforehand, as follows: '2 seconds' was a unit of pulse, either as a basic unit or a point of departure; 'b minor' was a key, with Sugimoto playing harmony and Pisaro playing melody: and 'wave', with no further details, simply whatever that word brought to mind. This was the extent of the specific discussion between the two."

huh, sorry about that, hadn't read it and/or forgot that if it was discussed earlier. I *was* listening to it as though they were Pisaro's pieces, so that filter was in place, though I don't think that particularly impacted my feelings about the pieces pro or con.

i have my ears to this at the present. the tone on the guitar in the second piece is priceless. It sounds like it could be direct to computer. The "prettiness" which other posts describe very much reminds me of LMC, but also in the way the piece unfolds. I love the field recordings. I am curious to hear more about what Taku has to say about "textures", the essay in the composition series has some interesting thoughts...

1 Fields Have Ears (this and Hearing Metal are my cat's favorites.He ignores music,usually,in a practical way...)

5 A wave and waves