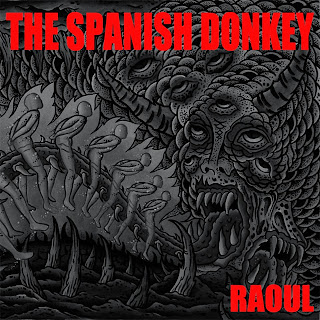 Ah, a good, old-fashioned organ trio...ok, not quite. I take it Spanish Donkey (named after a particularly unpleasant looking torture device) has been extant for a while, though this is the first I've heard them. Sampling via earlier videos, it seems the music on "Raoul" is something of a departure from previous approaches. Here, the trio (Joe Morris, electric guitar; Jamie Saft, Hammond and Korg organs, MiniMoog Synth, Echoplex piano; Mike Pride, drums) lay out three jam-type tracks that have a lot to do with tension and release, concentrating on the former. Morris, at least in this setting, has a little Sharrock in his playing which led me to sensing a Last Exit vibe here. That said, for the most part Pride resolutely refuses, for a long time, to fall into any kind of regular rhythm which is the prime tension generating element. The trio gets into this extended intro territory, all build-up and the listener (well, me, at any rate) sits at the edge of his metaphorical seat, waiting for the show to drop, for the rhythm to kick in for the spirit of Ronald Shannon Jackson to enter the fray. And it doesn't anytime soon. Saft's keyboards tend to stay underneath, supporting the more up front activity of the guitar and drums, and he's quite effective, billowing and surging, propelling the mass up and allowing things to subside. Whether or not a given listener will have the patience to wait for matters to really gel is another question. I went back and forth, sometimes enjoying the journey sometimes finding the meanderings less than justified. Even without the rhythmic impetus, every so often things simply come together with both suddenness and force and the music attains lift-off for a few minutes--marvelous when this happens and perhaps that's the point of trio: keep stirring the pot until it boils. It's not until about 21 minutes into the title track, out of 30 or so, that matters seriously coalesce and when it does, it's both exhilarating and feels somehow earned, Morris in the throes of ecstatic whammying and Pride occupying an interesting area between free and Elvin Jones-like propulsion before, at the very end, dropping into a backbeat for a minute. Saft's splintery organ wells up from nowhere, filling out the sound space and further enhancing the bristling energy. I note that band members reference a "microtonal blues" idea but will quickly add that this trio sounds nothing like La Monte Young's Forever Bad Blues Band--there's far more aggression. "Behavioral Sink" has a slower, bluesier pace, Saft's Hammond is more up front and Pride slides in and out of fairly regular rhythms, causing the track to grip more quickly. Morris' lines are cleaner here, making good use of wah-wah, more floating along than knifing through. At 12 minutes, it would have had perfect duration; at 22, it overstays its welcome a bit, but is still enjoyable. The last track, "Dragon Fly Jones", also grinds, Morris again fuzz-drenched, but the forward motion at a slightly quicker pace. Much like the title piece, it segues into tight clusters of ferocious energy, unspools, returns.

While the music isn't up my normal alley, I found a good deal to enjoy here and can imagine this trio producing a great live set. Recommended. 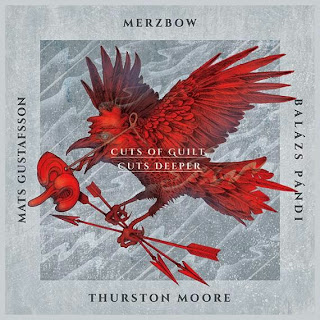 I came to this recording, perhaps unfortunately but understandably, with certain not very high expectations. I don't think I'd ever heard drummer Pándi before, but experiences over the years with Merzbow (noise, power electronics), Gustafsson (saxophones, g clarinet, power electronics) when not playing in his rare, more reined-in persona (e.g. the Lacy covers) and Moore (guitars) in improvised situations led me to expect a skronk-fest, more or less, a testosterone-fueled, seething mass. So we have four improvisations spread over two cds, each about 20 minutes long. Balls to the wall, as they say, save for the third track, about which more below. I don't derive great value from this, it all seems passé and beside the point. I guess there will always be a market of sorts for this approach, but if you've seen Borbetomagus in 1980, Last Exit in the mid-80s and countless other examples (much less noise with a purpose á la AMM in 1968!), you wonder: why bother? It feels good, I guess, and without a doubt there are fans for whom this album will come as a godsend. Pándi actually provides some interesting playing in this context, especially the rolling, tight sequences on the second track, reminding me of Turkish drummers like Burhan Oçal. Maybe the problem is that, to me it always sounds like four individuals, not one cohesive unit where the personalities have dissolved into a larger presence. I have nothing against wankery per se, but there's wankery and then there's wankery. Here, when the tracks sputter to an end it's difficult not to conjure up certain images...On "too late, too sharp...it is over", the quartet opens up the space a good bit, getting into an almost gamelan-like area, staying refreshingly uncongested for its first half, before becoming cluttered (though not densely so) in its second. This isn't the kind of music where a given member hangs back and doesn't play unless he's got something of value to input.

What they do, they do quite well. Whether one cares is another question. Those who do, have at it, you're in for a treat.