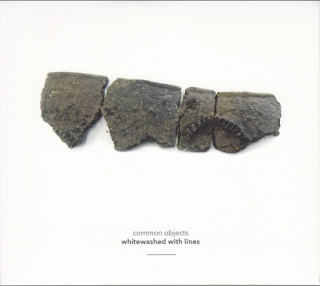 As indicated by its title, Davies' score centers around his fascination with the cup and ring phenomenon, a kind of stone carving found worldwide but with concentrations in northern England. Per Wiki: "They consist of a concave depression, no more than a few centimetres across, pecked into a rock surface and often surrounded by concentric circles also etched into the stone. Sometimes a linear channel called a gutter leads out from the middle." Their purpose is the subject of some debate. I wish a copy of the score had been included either in the disc sleeve or on the Another Timbre site, but no such luck. I'm assuming the score in some ways bears a visual resemblance to typical cup and ring patterns, but who knows? In any case, one simply listens and that's more than rewarding enough. It's a complicated, often densely layered work, lasting over 57 minutes, making it (for me) very hard to grasp as a whole but the journey, from field to field, is almost always rich and exciting. One quickly gets over parsing out who does what and settles in for the ride which turns out to be finely varied and exceptionally strong over the first half, from dark rough and tumble to sizzling electronics and biting strings. Sounds are usually sustained with either long tones or iterated strokes (handheld fans on harp strings?), everything shot through with crackles here, plucks there, saxophonic flutters and kisses (plus a great deal of, I think, Butcher-generated, controlled feedback) and tons more. Section after wonderful section, including an especially juicy portion with layers of ringing tones gliding along dark, resonant scrapes and shuddering, subaqueous-sounding saxophone some 20 minutes in. The quartet moves into a drone-laden area once past the half-hour mark which I find a little less absorbing than what preceded, though perhaps it's called for (or interpreted as such) in the score. But they quickly regroup and enter a lovely section of quiet raindrop-like sounds, very beautiful. The music fragments (effectively), emerges in a sequence of high chirps, settles into yet another sustained, dronish area but, to these ears, a much more complex and evocative one than before. A strong work, a fine listen.

Davies, in his notes, states that he wanted to evince the "different modes of working" experienced with this ensemble, hence juxtaposing the graphic score reading with the improvisation, the latter recorded a bit less than a year ago. If there's a clear difference--and, given only these two samples, I think there is--for me, it's much more to do with underlying structure than anything else. Not surprisingly, there's a kind of consistency, not necessarily better or worse, present in "cup and ring" that's less so in the improvisation (titled, with what I take to be sly reference, "repose and vertigo"). The quartet moves more quickly from point to point where, perhaps, the score led them to linger, overall resulting in a rockier affair. As well, Butcher's saxophone is more prominent as such (no amplification or feedback) which does flavor the proceedings differently. The result is a fine and sensitive performance, fairly close to what I'd expect given the participants. In this instance, though, I'm more drawn to the scored recording which imparts more of the unexpected.

But you can't go far wrong with either. Very good music, leaving me anxious to hear more of Davies' ideas and, for that matter, similar input from the three other musicians in terms of scores or other notions for this quartet.