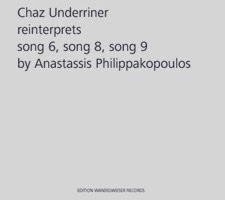 It's only within the last several months that I became acquainted, however minimally, with the lovely music of Philippakopoulos via two recordings on this same label. Apart from the stunning and subtle melodic content, one of the factors that appealed to me greatly was the way the grains of the instruments involved--bass clarinet and flute particularly--worked so wonderfully in tandem with the written content.

The recording at hand thus presents certain problems for this listener as Underriner, who I'd previously only heard as a guitarist in the ensemble that recorded the Pisaro/Sugimoto disc, "D Minor, B♭major", has taken three works by Philippakopoulos originally for, respectively, flute, string orchestra and bass clarinet and adapted them into variations for electric and bass guitars. More, as PIsaro puts it in his notes, he "explode[s] the duration of the pitches and put[s] distance between them", essentially drawing out the initial melodies into a stretched form that renders them virtually unrecognizable. I haven't attempted a side by side listen and can, I suppose, imagine being able, just, to hear some correlations but I think that would be almost beside the point here. We'll just grant the source and listen to the music as a new, if directly inspired, work. Still vestiges of the original "songs" remain in memory and, for me, much of that has to do with the aforementioned timbre, something I find lacking in the electronic hum that pervades the works as presented here.

"Song 6" sets the tone, so to speak, the piece adapted from flute to electric guitar and bass guitar, Underriner playing both. We get rich, deep tones, multi-layered and, played at volume, full of flutters that buffet the air. They appear, linger and dissipate, leaving stretches of silence, often lengthy, presumably simply the original score played just that slowly. But so slowly that, if it's possible to relate it to the primary source, I'm certainly unable to do so and, one assumes, that's intentional. So, one listens to it as is and it's a not unpleasant but, for this listener, generally unsatisfactory experience. I've often found e-bowed guitar (if that's what's being used here; sounds like it to me) to have a tendency toward a kind of blandness. Placed within given contexts, they can be fine; on their own, especially on a recording where you necessarily lack the immediacy that interaction with the room can provide, not so much. "Song 8" attenuates the string orchestra to three electric guitars and bass guitar (Armin Abdihodzic, Greg Dixon and Robert Trusko brought into the fray) but, for the listener, the result is pretty close to the same. Again, entirely pleasant, easy to immerse oneself in, but...I find I crave some grain, some air. I should say that there are portions here that are exceptionally attractive, certain combinations that do, indeed, imply some "other". "Song 9", rendered for two bass guitars, drifts appropriately lower, producing possibly the most delicious tones of the set, setting one's speakers to vibrate.

But at the end of things, I'm still left hearing more effects and too little of ideas and substance.