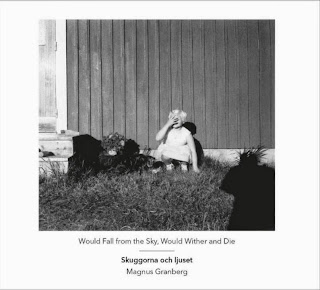 Magnus Granberg/Skuggorna och Ijuset - Would Fall from the Sky, Would Wither and Die (Another Timbre)

Granberg has crafted an odd and beguiling work. Scored for quintet (Granberg, clarinet; Anna Lindal, violin; Leo Svensson Sander, cello; Kristine Scholz, prepared piano; Erik Carlsson, percussion), it's 45 minutes of a certain kind of self-similar composition that I relate to pieces like Feldman's "For Samuel Beckett". Not that it sounds anything like Feldman--it doesn't, really, though one might call it a distant cousin--but that it operates in a fairly well circumscribed area, discovering a great deal of variety there but content to remain, with only the barest amount of push. There is a subtle, almost masked kind of cadence in effect, however. Very often I found myself thinking of a slow, gentle tumble down a hillside, juggling a few possessions, each step or fall similar in a general sense, different in particulars, never encountering a serious obstacle, just negotiating the slant and the minor bumps and branches along the way.

Describing it further is difficult. At first, the parts appear in brief, quiet sequences, almost pointillist but with enough contiguity between the sounds to form a kind of fabric, however tissuey. The clarinet tends to play the longest tones, maybe three seconds, the rest more or less fragmented, though the strings will also shift to slightly longer bowed notes. There are no real pauses or disjunctures; the space retains a consistent "average density", though constantly changing within that. My impression is that the scoring is intuitive but if I learned there was some kind of system in place, it wouldn't entirely surprise me. The clarinet seems vaguely mournful and given that the piece is in memory of Granberg's father, that's appropriate. The piano and percussion seem to propel the music a small bit, to the extent it's nudged along. But it's general between a thoughtful, even distracted amble and that slow-motion tumbling feeling mentioned above. Not dreamy, really, but thoughtful, concerned with balance and very patient, which makes a big difference.

Can't think of much more to say that would shed any light. It's really good, subtly bracing work.