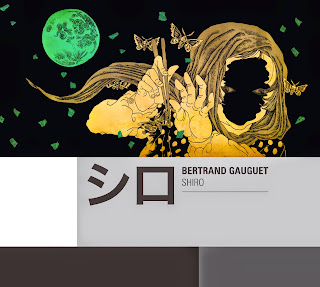 Eight alto saxophone improvisations, four acoustic, four with feedback and/or guitar amp. The language that Gauguet employs is not anything particularly new in this field but the combination of precision, delicacy and sensitivity of sound placement is unusually fine, making the disc well worth hearing. The tracks with electronic enhancement recall, of course, players like Butcher in terms of technical approach but Gauguet reaches different levels of subtlety and layered interaction--not better, just different, exposing his own personality. "Yūgen", the longest piece here at 14 minutes, is a superb, calm variation on tone, the pitches drifting in and out, steadily, beautifully held, Gauguet letting things linger enough that you have the impression of a quiet, night environment with just the occasional breeze floating through. this album was conceived during a residency in Kyôto and the legacy of the shakuhachi seems clear, though Gauguet is never at all imitative. On "Sabi", he lets loose a bit, creating a work the listener might have attributed to someone working an electric guitar in Hendrix-feedback mode, resonating cavernously and very effective. But the larger portion of this disc contemplative, controlled and very strong, an excellent recording. 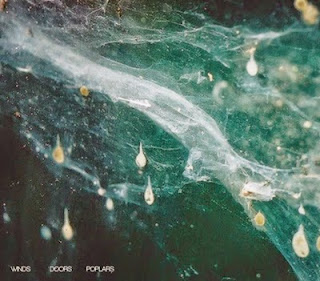 Similar to the Gauguet only in the sense that the strategy involved has been done before yet the results are striking and very well conceived. Alexis, for these five pieces, made field recordings in various situations including train lines and factories, concentrating on different sound areas within each while Rives created his soprano saxophone improvisations at another time and place without reference to Alexis' recordings, the two grafted atop each other leaving the listener to make connections and patterns. I'm guessing some amount of choice was made, perhaps by Alexis, in determining which of Rives' recordings to use with which of his own (simply because they seem to "fit" pretty well), but otherwise, chance is allowed to rule vis á vis the interaction of the elements. Rives spends substantial time in his "comfort zone" of the high-pitched, two- or three-ply tone (pairs well with wind) but also engages in deep buzzes and low clucks while Alexis' choice of venues/recording sites is also imaginative, from the fine, heavy openings and closings of squeaking factory doors to exterior, rainy environs. The one scenario that stands apart here is "Solid Steel Sculpture" where I'm fairly sure some large metal element is being "played", possibly by gloved hands, resulting in a sound (and even rhythms) not so dissimilar from Partch's larger percussion instruments like the Marimba Eroica. As said, the listener creates his/her own correspondences and, thanks to the wealth of material and the imagination which which it's deployed, there's no problem doing so. A very enjoyable, thoughtful exercise. 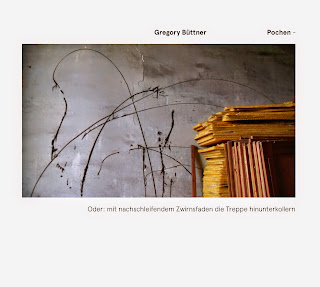 The title translates to: "Throbbing - Or: Roll Down the Stairs with Looping Twine" and refers to the house, a 19th century, former convent school in Picardy, France, which Büttner roamed and used as his instrument, the structure itself as a resonant chamber but also various elements within including "breathing wood planks, flickering light switches" and much more, the sum then worked into a set of pieces. The result is rather kaleidoscopic, though air-filled, and yes, there are plenty of throbs. I get the impression many of the iterative sounds are from, for example, old fans running with items stuck inside to be rudely caressed by their blades. Other sounds metallic in origin emerge, having their scarred surfaces rubbed or scraped. A wonderful sense of interior volume permeates the set, apparently large sounds echoing remotely down the hall while the foreground is filled with whizzing, dryly whirring and rattling noise, for instance, creating a fine feeling of distance and, as said, air between the sources. Büttner knots all this together with a good sense of sonic heft and an impressive ability to keep things from cloying, start to finish. 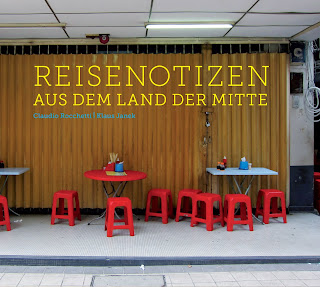 Travel notes from the Middle Kingdom (in this instance, Hong Kong, China and Malaysia) as realized by Rocchetti (field recordings, feedback) and Janek (processed double bass). Sounds from other musicians, many of them Chinese, are also incorporated into this dense and dirty mélange. Much of the environmental sound on the first track is booming and dull, as though some large scale event is occurring beyond the walls. In front and within this you hear conversation, bass clarinet, shuffling, bells, squeals and who knows how many other elements, all oozed out into the space. Kind of a kitchen sink approach, in strong contrast to the Büttner release above and, for these ears, more difficult to retain any balance, which is presumably not the goal, instead plunging whole hog into the aural morass. It's relaxed and resolutely lo-fi on the one hand but also feels carefully pieced together from their tour. There are moments when things congeal very well, as on the fifth track with its ambient/splatter mix and portions of the final cut--effectively desolate--but much of the disc, to these ears, sounds excessively haphazard and not terribly interesting. Always a subjective call, of course, especially as to which found sounds work, which don't, which sequencing strikes one as resonant and intriguing, which don't. By and large, this effort didn't connect for me.