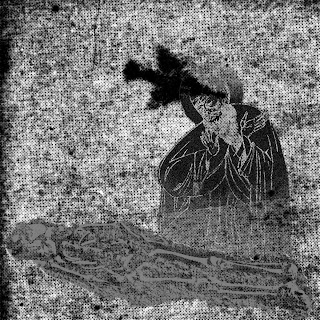 A mix of field recordings, sounds from You Tube footage (largely dealing with war, death and other atrocities) and musical contributions from, among many others, Elena Kakaliagou (french horn), Kostis Kilymis (recordings, electronics), Nicolas Malevitsis (noises) and Nikos Vekliotis (cello)

Sonically, it's a pretty rich stew, taped sounds from multiple sources overlaid, interspersed with abstract electronics, voices, the occasional sound of a traditional instrument. There's always the danger, of course, using sources with programmatic baggage such as war footage, that matters will become heavy-handed and forced. For my money, Drygianakis largely avoids this although he skirts close every so often (toward the end of the third track, for instance, where you're plunged into the midst of a pitched battle). There are well-realized, lengthy stretches of hollow, more desolate areas wherein the dramatics of a firefight might stand out, whether too obviously or not is a judgment call. For me, the evident anguish tends to carry the day over any kind of manipulation, the sounds of conflict being read as such, not as mere effects. There is, for example, a fine passage where you hear a bird call, isolated, with the very distant sound of explosions, soon accompanied by what seems to be a ghostly, shakuhachi-like flute and forlorn string plucks. If there's a musical reference that tends to crop up while listening, it's Simon Fisher Turner's work for Derek Jarman, although no pop or ambient elements surface here. There's a lot going on here and I pick up more each time I listen; an interesting, unusual work, well wroth checking out. 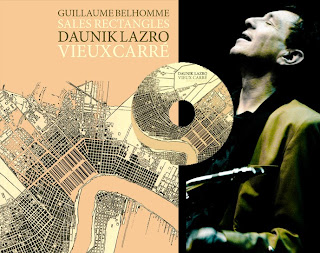 Another text/music publication by the intriguing Lenka Lente house. Here, Lazro, who has worked with Joe McPhee in the past (I recall the "Elan.Impulse" duo disc from the late 80s) takes on the beautiful McPhee composition, "Vieux Carré", first heard on the Hat hut release "Graphics" from 1977, a personal favorite of mine. It's a 10-minute solo baritone performance (this is a 3" disc), recorded live in 2011 in Rouen, in a space where you can hear a good deal of ambient sound that works very well with the music. Lazro interpolates some Monk but largely sticks to relatively traditional variations on McPhee's lovely, melancholic melody. Short but entirely sweet, such a strong tune. Belhomme's text consists of fragments--paragraphs or single lines--mostly in French, that refer to Lazro and McPhee (and jazz in general) but also include semi-random extracts from conversation and fleeting reflections on various activities in the world, each portion separated by a barcode, which lends a cynical air.

A good, handsome package, well put together. Lazro's performance is fine and I imagine would be a welcome addition to the collections of McPhee enthusiasts.

tried to click,'like'-facebook withdrawals are hell