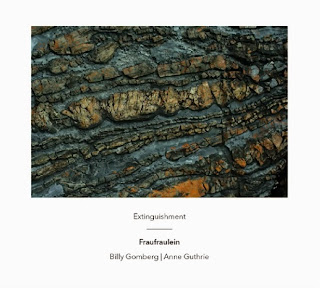 My first thought on experiencing this release, not having heard anything from Fraufraulein (Billy Gomberg, bass guitar electronics, recordings; Anne Guthrie, french horn, electronics, recordings) since 2009's "Donna Hayward's Secret Diary" is how different it sounds from the work each has issued individually since then, at least to the extent I've heard. Though you can pick up aspects of both, it seems less like a halfway meeting point than a triangulation that results in something rather different, though perhaps weighted a bit toward Guthrie. I get the sense they're really pushing to get out of their comfort zones and, by extension, to place themselves in a kind of "danger" where the outcome is less something fully formed than an exciting way-station. Whatever--and I could obviously be entirely wrong--it's a an excellent recording, one that I found a little opaque at first but which really opened up on each successive listen.

There's something about the structure of the three pieces--they feel very organic and unfolding, no clear framing but there's some underlying sensation of tensile strength; I can't figure it out, but I like it. Guthrie's horn, played straight, with overtones or sung into, is more overtly prominent than Gomberg's bass, though it's possible that any number of sounds are attributable to it, I suppose. But I hear more the horn wandering through various aural environments, often with the feeling of being outside, of looking around corners or hillsides. "convention of moss" begins with a very low bass hum, quickly engaging several strata of crackle, high feedback tones twining and numerous sounds evocative of a large space; really tons going on but always arranged in a non-cloying way, always flowing. Distant crowds, muted horn, clanging metal, that crowd congealing into an instructor and respondents, the latter singing a hymn in the sonic haze with final comments by a quietly growling Guthrie. "whalebone in a treeless landscape" starts, appropriately enough, in a far ore spare area, constricted horn floating above a desert of echoey bass notes and single, metallic clicks. The feeling is different from the first track, looser in a way, more springy and stretched out, bearing a palette full of submerged motorized sounds (dulled outboards?) amidst bell tones, far off children's cries, barely heard, a lot more, something like a denser scene from Ferrari. Guthrie's horn soon sounds long, low, forlorn calls through a more vacant landscape; hard not to imagine some large, pining creature, an elephant/Malfatti hybrid. But the core of the piece is still subtly moving, rotating, taking in other vistas; a really fascinating construction, a fantastic piece.

Robbie Lee contributes to the final piece, "my left hand, your right hand", though I'm uncertain in what capacity, maybe the voice (though I'd guess that's Guthrie) which sings a kind of simple lullaby/chant in high register in the middle distance, over a searing sine-like tone and occasional soft bass pluck; eerie and lovely. Actually, the voice seems to morph into the horn and then something that sounds bass clarinetish is heard; it's disorienting a little, though it sounded so innocent at first, like a benign dream slipping into malignancy, colors swirling and blending, darkening. In a way, I think it's the most daring track here if not the most "successful", but that's fine, a good thing really. The footing is unsure but the push is there.

[I'd, unforgivably, forgotten about the text that accompanies all Another Timbre releases, only reading after finishing the above. Do check it out: Interview with Gomberg and Guthrie]