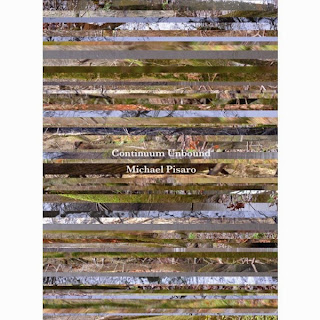 Maybe the first thing to say is that, to me, one has to listen and think about all three discs as parts of a single piece. As interesting (to say the least) and formidable as they are individually, I read them as necessary parts of a whole, though that whole is large and dense enough to easily deter quick graspability. Pisaro has fashioned a triptych that takes pure, unadulterated Nature as a starting point and then attempts to dissect it, recognize and appreciate patterns (all the while clearly understanding that any kind of pattern recognition is a human function, not necessarily existent in the "real world") and, ultimately, to investigate the possibility of constructing a path through this (explicitly referenced) fog and begin to make a kind of sense of one's experiences.

The first disc, "Kingsnake Grey" is "simply" a 72-minute recording of a sunset on New Year's Eve, 2012 in Congaree National Park, South Carolina, begun about twelve minutes before official sundown time. It's only the sounds of the forest, no enhancements or intrusions on the part of Pisaro or Stuart, no sympathetic sine tones or bowed percussion. One can easily imagine many a composer constructing, say, an hour-long piece and doing something like this for five or so minutes as a kind of preamble. But for Pisaro this is central, the primary seed for what follows, a sound world entirely capable of existing on its own and being contemplated in depth for an extended period, an outgrowth of the post-Cage aesthetic of the Wandelweiser group. I've little idea of how recordings like this are accomplished but here there's an enormous transparency and perspective achieved; in addition to immediate area sound recorders, I have the impression of directional mics that can pierce some distance into the sound field, ignoring the nearby, though I also have no idea whether or not such things exist. One gets an extremely full sense of the world here, but full of both sound and space. Pisaro understood the likely main arc of the interval, one in which bird song gradually quiets and insects take over. This occurred but with infinite variations. In his notes (which are invaluable), he mentions a squirrel making a desperate leap just when the birdsongs were winding down, causing a renewed flurry of avian activity but then a hastened quieting and realized that this kind of event was occurring throughout the woods, both serving to build that arc but also to invest it with endless complexity, the kind of realization, I imagine, that spurs his own compositional thoughts that surface subsequently. I've listened to this disc some eight times now and am continually hearing new sounds and patterns among the creatures, the background hum (is there a highway audible here?), passing jets, various apparently manmade sounds (metallic tapping and general bustling about now and again) and sounds whose origins I can't quite determine, all intersecting in various directions in space; really an astonishing document in and of itself but, as said, just part of the picture here.

A small good thing about the second disc, "Congaree Nomads", is that Pisaro, again unlike what one might reasonably expect from any number of composers engaged in roughly the same area, doesn't take the "Kingsnake Grey" tapes and somehow rework them. Rather, he uses other recordings made in the same park, 24 of them in three-minute segments, arranged "geographically", from north to south, as the spine of the new work. For me, this adds to the sense of largeness, inferring the enormous range of possibilities in play. They fade in and out, allowing them to exist simultaneously as discreet points of reference but also bearing a relationship, slight or strong, with their antecedents and successors. Overlaid on these recordings is the realization of a Pisaro score by Greg Stuart (who, I should say, shoulders almost as much responsibility for the success of this venture as does Pisaro) on various bowed percussion instruments (marimba, vibraphone, glockenspiel, crotales). Each of the 24 portions of the score contains from one to twelve tones and each initially matches up to the three minute length of the field recording extracts though gradually, the instrumental parts increase in length and begin to overlap. Also, the number of tracks on each instrumental section grows from one to 48 with the result that what began as clear ringing tones coalesces, toward the end of the piece, into a super-rich, organ-like cluster, evocative of the idea of "fog" which Pisaro cites as a thoroughgoing inspiration here, literally and ontologically. That's the nutshell and I may well be omitting important aspects or getting some wrong, but the effect is strikingly achieved, moving from the quiet opening moments, with soft birdsongs, a burbling stream, odd, wooden knocks and more, all beautifully present, laid alongside initially low, resonant bowings, the latter almost functioning like the sine tones in "Transparent City", here giving (me) the sense of the soil underlying the flora and fauna in addition to the gathering fog, maybe the condensation forming on the leaves sublimating to mist. It's a lot to grasp and I often lost my way here but, in fact, keeping the idea of a hike in mind helps a great deal, staying aware of the gradual landscape changes and those increasingly massed chords/fog banks ahead. The "organ" feel emerges strongly about midway through, inevitably imparting a "forest as cathedral" aura, something that requires a bit of grappling for this listener, an experience from which I usually escape unscathed. Those chords, I assume by virtue of multilayering and using close pitches, achieve a fantastic pulsing quality late in the work, transcending the church organ, entering the real world. An amazing piece, one that I think I've really only begun to get a handle on.

And then we come to "Anabasis", the most complex and, for this listener, most fulfilling part of this trilogy. The score, which is included in the booklet, provides a welcome roadmap for the piece which is set for five sound areas/players: Sand-Greg Stuart, "gravity percussion with sand"; Winds-Patrick Farmer, field recordings, hydrophone; Tones-Pisaro, electric guitar, piano, sine tones, studio and field recordings; Waves-Joe Panzner, electronics; and Interludes-Toshiya Tsunoda, sand, copper foil, polyethylene sheet, fan, sine tones, hydrophone. The sounds of the first four each predominate in their respective 15-minute sections, augmented by contributions from the others (save Tsunoda) in predetermined one or three minute segments; the structure of these segments remains constant, their occupancy varies. After each 15-minute portion, there's a three minute interval by Tsunoda (augmented by two of the four other musicians). It struck me as interesting that there's no obvious reference to the Congaree National Park itself (though it's possible, probable even, that some of the field recordings used by Pisaro derive from there) which seems to lead to an idea of transcendence, to a universalizing of that particular area; not sure. Pisaro references Badiou, particularly a passage with regard to a group of mercenaries lost in a desert having to "invent its path without knowing whether it really is the path of return", which could apply to bushwhacking as well as the musicians here negotiating their way. The sounds were created remotely by the musicians involved, with no knowledge as to the contributions of others, enforcing the sense of different solutions/pathways through the problem. As is always the case with Pisaro's music, there's much more going on than that and, again, his notes offer an excellent, clear look into his whys and wherefores. We hear music that grows from trickling sands to storms of same, similarly with wind; there's a constant ebb and flow in play. The moment Pisaro's featured portion occurs, at the 36-minute mark, there's a harkening back to "July Mountain" as, entirely unexpectedly, a piano appears, playing simply, tonally, though fragmented, as though glimpsed through a prism; it's an arresting, beautiful instant. It feeds in and out throughout the segment, ghostlike, a couple of notes here and there, a vestige of Romanticism amidst the hums, waves and silences, very moving. I should note here that Tusnoda's interludes work wonderfully, staying within the general aura of the work but also standing apart, a fine transition/contrast, especially the closing passage which opens enticingly onto new ground. When the final quarter begins, we hear what sounds for all the world like an organ. I assumed the trompe d'oreille lied in Panzner's hands rather than Stuart's (it's "his" section) though, peering more closely at the score, these figures seem to emerge during Pisaro's three minute sequences. If so, interesting, and fantastic as far as I'm concerned, that he seems willing to introduce this order of material, so traditionally attractive and strong. The whole composition breathes with conviction and many, many layers of depth, again more than is possible to go into here, more than I'm sure I've heard.

Thanks, Brian. I can't think of any other writer who covers this vast yet specific area as perceptively and cogently as you do.