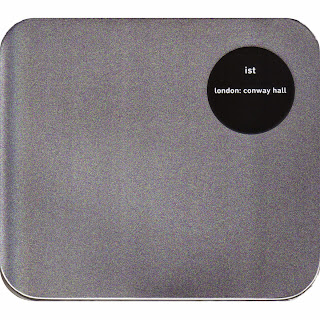 The third in a recent series of historical release of the Ist trio issued by member/cellist Mark Wastell (the groups including Rhodri Davies on harp and Simon Fell on bass), the previous pair from 1997 and 2001, this one from May, 2003, a live performance from the Freedom of the City Festival in London. The first of these, and to some extent the second, showed steps along a path from a more efi-centered approach towards a "lower case improv" idea, though each of the musicians had already done work in both areas and many between (or beyond). By 2003, though, the idiom had been firmly established for a while, so the divergencies from that sort of attack on this recording have to be deemed intentional or, more likely, created without regard to any such parameters, simply the way these three musicians operated. Still, of the three, it has always been Fell whose heart seemed more firmly embedded in a more active, visceral type of music of the sort heard on recordings under his own name on Bruce's Fingers since at least the mid 80s. Though he's be a part of ensembles like VHF (the first Erstwhile release), I had the sense from both recordings and seeing him live, that he chose not to circumscribe his playing so much and enjoyed more dynamic environments given his druthers. All of which makes for an intriguing contrast here, to the extent this may have been a typical Ist show of the period (and to the extent Im not misidentifying Wastell's cello with Fell's bass and vice versa, always a possibility.

It opens pensively, possibly a bowed harp with pizzicato from the strings, the bass more forcibly, but everything calm and considered. There's an air of mystery, the bass staying more or less in tonal areas, but also an uneasiness occasioned by the odd forte pluck. Fell worries this territory consistently for a while, substituting fine, deep bowings for the pizzicato, the others remaining sparse and attentive. Davies does a fantastic job of extending the space via some fairly harsh but beautifully placed whacks at his harp, Wastell's (?) dry rubbings establishing a palpable aural distance, really excellent. About two thirds of the way through (the set clocks in at only 23 minutes) the music takes something of a turn, becoming more agitated and active, reminding me a bit of Derek Bailey's mode of attack, still paying attention to space but filling it with more jagged shards, including harsh harp strokes. It all works, the mini-explosions hovering convincingly, creating fine tension.

A very good set and, I think, my favorite thus far among these archival releases.