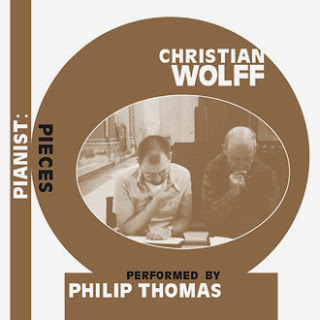 It's been a very Wolffian month around these here parts, initiated by the receipt of this very fine three-disc set. I received it while Keith Rowe was staying over for his performance at the bizarre event at the new Louis Vuitton Foundation and we listened to several tracks together, comparing a couple to Tilbury's renditions. Knowing I was going to be going to Nantes on the 17th of November for two evenings devoted largely to Wolff's music, I began to immerse myself in his work, going so far as to construct an Excel spreadsheet of his complete works, noting both what I have on disc (and observing vacancies) as well as searching out and listing what I could locate online, thereby exposing myself to much music of which I'd previously been unaware. Additionally, I went and ordered several CDs on Mode and Wergo (plus the 10-disc box set of Music for Merce, which includes several Wolff pieces) which were waiting for me upon my return from Nantes, where I'd spent three amazing, humbling days hanging out with Wolff, Tilbury and Rowe. All of this has been a somewhat overwhelming experience.

I came to Wolff's music fairly late, probably not seriously listening until the mid 90s and even then, it almost always gave me an odd kind of "trouble". It seems so transparent and clear and yet I constantly found it very difficult to grasp. The term "slippery" would often come to mind. I talked about this with Wolff last week and he agreed, even enjoyed the reaction, saying it wasn't uncommon and lay along the lines of what he desired. I felt it was my issue, not the music's and persevered, only in recent years feeling I was generally able to wrap my head around most pieces, much to my great and consistently expanding enjoyment.

This recording is laid out quite clearly and, in a sense, transparently. The first disc is comprised of seven works from 1951-1959, when Wolff's compositional gifts were flowering (always worth remembering, this means from the age of 17 to 24!), the last disc, pieces from 2001-2010. In between, Disc Two is devoted to a 2004 work, "Long Piano (Peace March 11)".

The word "transparency" surfaces several times in Thomas' excellent and informative liner notes at the same time as it's linked to "complexity" with regard to Wolff's notations in his scores, which often include tablature playing (specifying the fingers to use but not the notes), lack of tempi, dynamics, octave choice and more, including instructions which will give various outcomes depending on how "well" the performer has carried out some prior directive. This last is the case in "For Pianist" (1959), which is heard at the beginning and end of Disc One. The two versions make sense in that the performer is allowed to play the score in any page order, skip pages, repeat them, etc. I have versions of this piece by Tudor, Rzewski, Tilbury, Schleiermacher and now Thomas and was hoping to do some comparison listening and write about it; I did the former but damned if I can say anything one way or another about the interpretations as varied as they are. It's more to the point, I think, to appreciate how wonderful and rich the piece itself is. I won't (can't, really) say too much about the 50s pieces except that their clarity, musicality and sheer honesty shines through. There's something I've found increasingly magical about Wolff's pieces or, perhaps given their nature, the readings by pianists like Thomas and Tilbury, who have lived through 50+ more years of musical and cultural changes, not to mention improvisational histories in Tilbury's case, which I can't help but assume brings more richness to such music. Suffice it to say that I get the feeling I could listen to these works for years and still find myself unlocking attributes previously unheard.

"Long Piano (Peace march 11)" is on the one hand monumental but of an oddly porous nature, made up of 96 fragments which range from silence to elaborate forms that refer to the classical lineage, toccatas, chorales, oblique melodic references to Schumann and Ives and a concluding "setting of of the medieval French song, "L'homme armé" (all derived more from Thomas' notes than my own ears). I'd been listening to what recordings of Wolff's Peace Marches I could find in recent days and, as one would guess from the titles, there are often hazy allusions to folk or protest songs embedded therein, something Wolff has made a frequent practice since the mid-70s; it's in another county from Rzewski's 70s work but not so distant that you can't make out traces of resemblance. One gets a feeling of extreme expansiveness here, a vast landscape of possibilities. Again, the composition affords the pianist many choices; this is the first I've heard the piece and am very curious to hear others (there's one by Thomas Schulz on New World). As is, this rendition is spellbinding.

The post-2000 selections reflect what I think could be fairly called the more classical or lyrical strain in Wolff's recent music, often containing longer lines and a clearer indebtedness to the tradition established by Bach and his musical descendants though, of course, filtered through Wolff's unique lens. That slipperiness I mentioned is in full effect here in that the form often leads you to think one thing is occurring where, in reality, a dozen other things happen instead, all of which seem to make sense but require a huge expansion of listening prowess to understand and accept them. Subtly astonishing music. Several of the Nocturnes were played by Wolff and Tilbury last week and it was a pleasure to hear them again here, recalling Wolff's explanation (here, in Thomas' words) that "the performer is permitted to read any note in any clef and any octave and with any doubling of these" so that a single note could be read as a multiple note chord; Tilbury took delight in this. Also present are "Pianist Pieces", "A Piano Piece", "Small Preludes" (especially marvelous) and "Touch".

There's so much here, both on this last disc and the entire set, almost too much to stand back and take in. Just a tremendous effort and result, an absolute must for the Wolff aficionado, a fantastic job by Thomas.