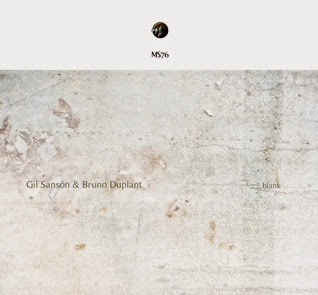 Labels tend to develop their own aesthetics, naturally enough, so it's interesting when one like Mystery Sea (with its sister label, Unfathomless), moves a bit outside of its comfort zone as is the case on at least one track here. There are three works presented here, the first and third from scored by Sansón, the title track from a score by Duplant. I'm guessing the scores in question are graphic/text and am reasonably certain the recordings are constructed from remote performances (as Sansón resides in Venezuela and Duplant in northern France), which has been a standard mode of operation for Duplant in recent years.

"foliage, brackets, skidmarks", by Sansón, begins with field recordings of what sounds like a small urban area before it's joined by Duplant's arco bass, a sound I hadn't heard from him in quite a while and which was very welcome, dark, low and vibrant; "just" open strings, I think, but it works very well. A soft jingling, almost an alarm clock, enters, followed by high pitched, bowed metal (?), the bass still interjecting comments, though softer, over the basic ambient recording, eventually reestablishing itself as the primary voice. An attractive work though, at 21+ minutes, possibly lingering on a bit longer than necessary. Duplant's "blank" also commences with the sounds of the street, here perhaps a little more urban, a car alarm crying in the distance. The external sounds here are subtler; it's often hard to distinguish which are from the street, which are created by the musicians, though one low hum, electronic, is certainly studio-formed. The piece itself is rather amorphous, held in place by the field and, to an extent, by that low hum, but spread out and centerless, not a bad thing here. It's the same length, ore or less, as the preceding track and, again, I could have seen it pared down by five or six minutes. The final track, "detachment", by Sansón, is the one that breaks the mold, consisting largely of silences interrupted quite brutally, by what sounds like jacks being pulled from amps or other disruptive electronic malfunctions. The silence gives way to a hollow, steely sound, occasionally automotive, reverberant for a brief moment, then the threatening pops recur, echoing and feedbacking in the darkness. This back and forth continues for most of the duration, sometimes discreet, sometimes overlapping; I get the impression one musician was responsible for each sound-set, their occurrences left at least a little bit to chance, perhaps within time brackets. After 18 minutes, a new sound occurs for a minute or two, liquid on hard surface, like rain water washing down a street gutter, after which those pops surface with a vengeance, now apparently causing windows to rattle. A tiny flurry of birds, then silence; quite different from the usual Mystery Sea fare and, at 23 or so minutes, of perfect length.

Recorded in the Olympic Rainforest of Washington state, at the confluence of the Hoh River and the Pacific Ocean, Chasse's work is a fine example of exquisite on-site recording though one of those that inevitably, for me, raises the question of its value in disc format as opposed to the (admittedly unlikely) experience I might have for myself at the same location. Chasses chooses quite well--it seems to be an especially rich, varied and fascinating soundscape, with massive tree boles and limbs having piled themselves on what he describes as "a dense litter of granite pebbles and driftwood" (as can be seen in the fine accompanying photographs), the layering and spaces between creating wonderful sonic caverns within which water, stone and air act together to generate an amazing aural environment. And he records all this decidedly well. I really can't complain except--I'm not sure to what end. Most intriguing, for me, are the moments, as on the third track, "ovoids for a tumbling pattern", where what I take to be the percolation of water through rocks sounds for all the world like West African drumming. These micro-environments--something heard off and on throughout--strike me as the most interesting portions, perhaps because I get the feeling they represent events I might have missed were I there. Hard to say. These are quibbles, to be sure and more, quite like things I've written before about efforts in many such similar circumstances. As beautifully realized field recordings derived from a striking place, "Characters at the Water Margin" is excellent and well worth hearing by aficionados of the genre. I'd simply preferred to have been there myself, making my own discoveries.

Ciuta approaches the site recording game, on this recording, with a conception that, for me, raises the level of interest by providing a framework which incorporates time, light and space into the equation in a (idiomatic, to be sure) pre-conceived set of parameters regarding recording intervals, time of day, level of activity, sky conditions and light intensity among others. The recordings, thus made, were also assembled by a set of rules created intuitively by Ciuta. Few if any of these are overtly manifest for the listener at home, but there's something (again, for me) intellectually comforting in knowing that Ciuta took such care and precaution and had a working idea that was meaningful to him, which in turn causes me to attempt to come to grips with it, to hear the results through his ears. The recordings were made on the Curonian Spit, a kind of thin barrier reef near the border of Lithuania and Poland, enclosing a lagoon. The results sound more composed than, say, the Chasse album above, but also somehow more mysterious, cloudier, though with the strong sense of something solid lurking in the mist. The sounds are less spectacular but more evocative. They're very transparent, with a great range of crisp to vague textures and a huge range of color, even if there's a muted, brownish-grey tinge to the tracks. The clocks of pebbles, some oddly trumpet-like trills, muffled booms--they're all positioned on the edge of assimilation, of being understood in context, but never quite get there, happily. I'll complain slightly and opine that the disc might have been more powerful if it cut off after about 40 minutes instead of running its full 70+, but I guess you make your conceptual bed and then lie in it. As is, "l2di-(3)" (no explanation of the title is given) is an unusual and very rewarding example of what can be accomplished when site recordings are laid atop an idea. Well done.