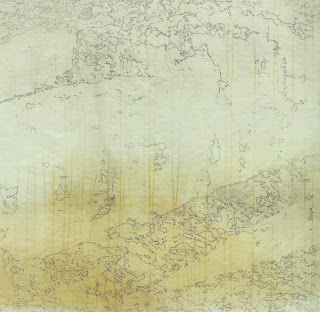 It's going to be fascinating hearing different versions of Pisaro scores as they surface, as some are beginning to do already. Earlier this year, Miguel Prado released his reading of "White Metal" on a Senufo Editions LP (my review here) and we now have one from longtime Pisaro collaborator Greg Stuart and Joe Panzner. I've been listening to the new release both independently and side by side with the Prado, a luxury not often afforded. Pisaro has said that both reflect his score accurately and to the extent I can understand said score (minimal) that seems to be the case; similar basic gross structures are apparent in each and, to an extent, the raw materials overlap a bit, both Prado and Stuart/Panzner taking the title to incorporate or at least make reference to both white noise and (to my ears, to a far lesser extent) the metal genre.

On its own, this new version is a thrilling ride. One gets the impression, despite the occasional respite, of hurtling forward with extreme rapidity through notably metallic funnels and corridors, multiple layers of electronics melding into an all but impenetrable web from which the odd discreet sound emerges; I swear I heard a dial-up modem at one point. I'm still a bit unsure as to whether or not there are aural elements in common with each rendition (i.e., that are always part of any version). For instance, a regular, ticking sound appears near the beginning of both the Prado and Panzner/Stuart recordings; maybe the latter sampled the former, who knows? The intense nature of the present recording causes the silences to stand out in starker relief, imparting a very different sensation to the listener, here a kind of break from the intensity, more disquieting than is the case on the Prado; it's only gradually that the listener realizes that the silence isn't utter but, I think, contains the sound of the room. Not so surprisingly, the more I listened the more I picked out, the more deeply I understood, or began to understand, the interplay of the elements. This might be something that has to do more with my own reaction to various aspects of "noise" music (which Panzner has certainly delved into in past works) and the relative difficulty I often encounter in wending my way through. Listeners more generally in tune with this approach may have few such hindrances. I tend to hear Pisaro "first", then filter it through the performers' attack, so it sometimes takes me a while and, even so, I'm usually left with the distinct impression that I've only, if not merely scratched, at most gouged the surface. Sitting here now, listening to "White Metal" for about the eighth time, I'm hearing new things.

If, at the moment were I forced to "choose", I'd prefer the Prado, it might only be because his approach maps more directly onto what I imagine mine would be, not the most meaningful criterion. This one is strong, vital and, to the extent I can determine, a fine interpretation of Pisaro's piece, one that I'll return to many times. I also look forward to the realizations of this work, and others, by many more musicians in the future.