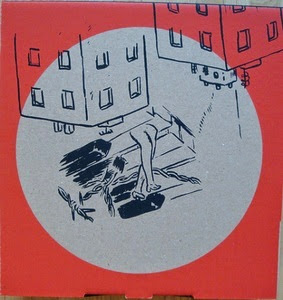 "This is a magic record!" proclaims the publicity sheet inside the cardboard box that looks as though it might hold a mini-pizza. But no, instead we find five 7" singles (pink, gold, purple, red and yellow. plus a poster of sorts by Edda Strobl and Helmut Kaplan). Each single bears a composition by a different composer/band on one side (in color sequence: Peter Ablinger, Opcion, Kreisky, Bernhard Lang and Bulbul) and a piece by The Striggles (Kajkut, drums; Krienzer, guitar; Lepenik, guitar; Plass, voice and guitar--surnames only) which may or may not have any relation to its obverse. The "magic" involved is that most, perhaps all, of the sides are double-grooved (at least, maybe triple?), providing two different possible playbacks, though often the differences are subtle enough to be just barely noticeable, something I find far more interesting than completely different tracks. I'm not so sure this has been magic since the 1901 Pre-Dog Victor A-821 Fortune Telling Record and certainly 1973 Monty Python, but anyway. Here, especially if one was approaching the records innocently, you might become somewhat perplexed as, say, the closing word in a song wasn't the same as you remembered it form the last time. The tracks are very brief, lasting only a couple of minutes.

Pink: 1) Ablinger's "Black & White". One groove is silent, save for surface noise and, possibly, some recorded sounds indistinguishable from surface noise (there are some faint clicks near the end). Another contains an ultra-low, pulsating tone. Both are quite enjoyable! A) Striggles, "At the End of the Day". A slowed down, warped piece, with dreamy, staggered rhythms and wafting, hazy vocals; reminds me of Shadow Ring, rather nice. If there's a second track embedded on this side, the differences are subtle enough that I can't detect it.

Gold: 1) Opcion (Nikolaos Zachariadis), "|..|..". One track of slowly thudding sounds with some echo and ambience, another with more or less the same sounds, perhaps pitched lower, but greater echoing and accompanied by shuddering washes of electronics. Again, rather effective. A) Striggles - "Kårl". Clanky, buzzy percussion leads to two variations of the song, one with vocals, one with massed noise (including crowd sounds an , possibly, strangulated vocals) each sounding (to me) like a certain kind of 80s German synth pop (Pyrolator?), but don't go by me. Kinda catchy, I admit.

Purple: 1) Kreisky, "Ballett". Kreisky is a quartet with Franz Adrian Wenzl, keyboards, Martin Max Offenhuber, guitar, Gregor Tischberger, bass and Klaus Mitter, drums. The song is a good, straight ahead rocker with nods to punk and surf music, maybe even early Pink Floyd. Both tracks begin with identical drum patterns but the vocals stray in different directions, one proclamatory, one dreamy, reaching a weird, kind of Zorn/Morricone space. A) Striggles, "Das Ist Doch Kein Echter Krieg" ("That's Not a Real War"). A fun piece, squelchy, synth, faux-funk with healthy doses of static, the lyrics rendered in a deep, wry voice in one version, sweetly sung (reminds me of Klaus Nomi) in the other, the rhythm also faltering quite nicely.

Red: 1) Bernhard Lang, "He Wouldn't Notice". As near as I can determine, there's only a single track, about a minute long, consisting of a female voice repeatedly saying, "If you approach him, he won't notice" over a very attractive, percolating, percussive layer, ending with a disquieting gasp of sorts. Interesting piece, a little reminiscent of Ashley. A) Striggles - "Lines". I may be reaching, but the percussive/bass line hear does seem to relate to Lang's, if obliquely. The two versions vary this thyrhm and the pitches therein a little bit, one ending with a male voice saying, "Lines are straight", the other, "Lines are curved".

Yellow: Bulbul, "331/345". An Austrian trio, I think, Bulbul offers a rockish number, quite short, with a Winged Eel Fingerlingesque guitar solo over "Wade in the Water" chords on one track and then an oddly, slowed down version of the same, or similar, piece overlaid with a munchkin-like chorus. Chunky and not unpalatable. A) Striggles - "Meine Kleine Schwester" ("My Little Sister"). veery much with the same humorous sensibility of the track on the purple record, a wacky marching band image. Two versions, not so different, one with flutey sounds atop, the other featuring Headhunter-era electronics bubbling away. As before, fun, if not terribly nutritious.

Which is pretty much my take on the project: good fun, generally enjoyable to hear (worth it, for me, to experience new pieces by Ablinger and Lang) and/but light. I gather that fits in with the Striggles' intentions.

Did you know that you can create short links with Shortest and get dollars from every visitor to your short urls.