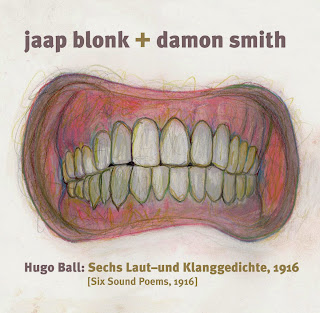 This is a difficult one for me to properly consider or write about for various reasons. First, I've never really warmed to most Dadaist poetry. Not that it's by any means been an object of serious study (largely due to my not being drawn to it in the first place), but when I've encountered examples over the years, including Ball, as read by others, it simply fails to connect (ok, the Marie Osmond rendition is pretty great). My failing, I'm sure. Second, in my admittedly limited exposure to Blonk's work, both live and on disc, I've similarly been unable to make much of a connection. This is a "condition" I share with many, to be sure: a difficulty with free improvising vocalists generally, not just Blonk. It's long been a subject of discussion why this issue is so (relatively) prevalent among a decent percentage of free music fans, perhaps having to do with certain expectations that come into play when we recognize the human voice, some need for narrative, some reluctance to let it be heard as abstractly as we do a trumpet or saxophone sound. For myself (and I think this is also something commonly shared), I feel more comfortable when the vocalist goes to an extreme in that abstraction, for example Ami Yoshida or Christian Kesten; then I'm able to countenance it better. Again, my failing, no doubt, but not an uncommon one as far as I can tell. (And I absolutely love it when a free vocalist reins him or herself in, using what they've learned, as for instance when Phil Minton sings "The Cutty Wren").

I was thinking that Blonk and Ball seemed to be a natural enough pairing and see that he previously recorded some Ball pieces in 1989 with alto saxophonist Bart van der Putten and bassist Pieter Meurs, similarly titled "Six Sound Poems of Hugo Ball" (Kontrans), and presumably has performed them elsewhere, as he has with Schwitters and others. I'm curious how/if the renditions differed over the year with various collaborators. In this case, I have to say that the results more or less approximate what I expected going in, with Blonk giving excited, often manic readings, generally conveying a kind of mental imbalance or, at least, a different balance from that maintained in the everyday world, entirely appropriate to the Dada spirit, of course. Given that there are texts, it's not free improvised per se but,, obviously, he has great fun with stretching, rumbling and disemboweling the words, made up though they be. Smith, whose playing I always find very fine, including in contexts of which I'm not always too enamored, is excellent here, tending to match Blonk in freneticism, often skittering in high registers. When he lowers the pitch and digs deep into the bass, almost Hadenesque, as on "Karavane" (the piece given such a heartfelt rendering by Osmond), things work very well for this listener, Blonk's ravings given a good, strong counterweight. His arco work on "Gadji Beri Bimba" is also outstanding, again pairing well with Blonk's more full-throated warblings and trills on this piece; similarly with his harsh, dark plucking vs. Blonk's guttural growls on "Totenklage". Given these examples of compatible playing/singing, part of me would have liked to have heard the opposite, say Smith playing richly and melodically alongside Blonk's/Ball's frenzied sound poetry. But so it goes.

If, at the end, I remain not entirely convinced, I wound up appreciating the effort and certain portions of the performance far more than I would have expected. But please take my predilections with a grain of salt. Ball and Dada enthusiasts will very likely derive a great deal of pleasure from this one.