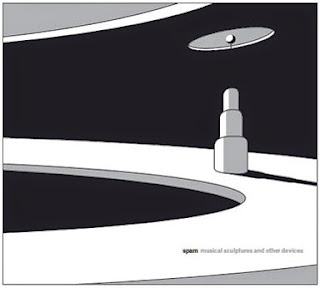 SPAM is an acronym for San Pietro a Majella, the institution where several of the musicians represented here (Salvatore Carannante, electro-acoustic devices, recycled mechanisms; Chiara Mallozi, cello, prepared cello; Dario Sanfilippo, computer; Stefano Silvestri, analog synth; Mario Gabola, feedback saxophone; Agostino Di Scipio, feedback systems) met and played. The disc is comprised of a performance of Cage's "Sculptures Musicales" (which itself was inspired by the Duchamp piece of the same title), performed by the first four of those listed followed by pieces from Carannante, Di Scipio/Gabola, Silvestri and Sanfilippo. Di Scipio provides excellent, informative liner notes for the venture.

The Cage work was performed with "unstable and precarious" instruments, the musicians distant from one another in the far corners of a cave in the St. Elmo Castle, Naples. It's a fine piece, incorporating silences that seem all the more effective given the spatial distances, the sounds thin here, flute-like there, now and then expanding into rougher passages, like an industrial groan, easy to imagine wafting through the dark space. A fine realization. Carannante's "...in the temple of Mercury..." combines field recordings (sylvan sounding) with electronics that again recall the flute, more toward shakuhachi. It's pleasant and moodily thoughtful, though perhaps a bit insubstantial overall (I get the impression that what's presented here is an excerpt; if so, maybe the entirety would be more fully formed). Di Scipio and Gabola's piece sounded improvised to me and, indeed, is composed of three improvisations spliced together, electronics with alternately plaintive and sputtering tenor saxophone. Again, well constructed and considered, though not so different from any number of such performances over the past couple of decades. "Esperimento delle interazioni caotiche (part 1), by Silvestri is a finely realized work for analog synth and "non-linear oscillators", harkening back to Xenakis (to my ears) but still sounding fresh, vigorous and also, crucially, much less "polite" than the preceding tracks, raning from sparsely abstract to rumbling and rudely noisy; good stuff. The disc concludes with Sanfilippo's "LIES (distances-incidences) 1.3 (estratto)" for computer and electronic systems, a strong, icy composition, a bleak, landscape buffeted with abrupt gusts and cold splinters, building to a very brief but surprising explosion, then desolation.

A somewhat mixed bag, then but with enough vibrant work to warrant investigating.

Spoils & Relics is a UK-based trio with Gary Myles, Kieron Piercy, and Johnny Scarr that deal in improvised electronics. That's about all I know. The set, a bit over a half-hour in length, is a kind of standard broken electronics/sparse noise performance, active and sandpapery, exploring a wide range of more or less harsh sounds but lacking the kind of incisiveness one hears in, for example, quasi-similar music from Bonnie Jones or Richard Kamerman. Here, there's a bit more of a soundscape approach, with shards of radio and crowd noise filtering in, some looped flute, etc., all inevitably swallowed into some rough, thumping vortex, spit out the other end, mixed with wind, scrapings, buzzes, kind of a homemade IRCAM-y feel. The looseness of this attack guarantees moments when things congeal nicely and perhaps that's enough, but I'd like to hear more of a conception, more "reason for being" than I'm picking up here. Not bad but not essential. 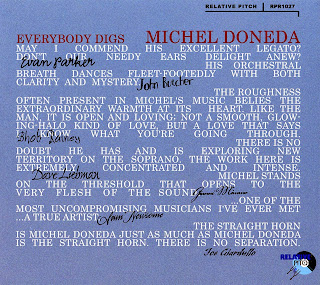 OK, first things first. The title is awkward enough but the cover, with laudatory quotes from seven saxophonists is just cringeworthy.

That said, the music, all solo soprano saxophone, is pretty good, even surprisingly so to these ears, having caught Doneda twice in recent months here in Paris (with his trio and in duo with Lê Quan Ninh) and having been unimpressed both times, as well as not having been knocked out by most things I've encountered over the years since first hearing Doneda around 1999 on his fine duo with Ninh, "Montaigne Noire". Recorded in La Chapelle de las Planques, a Romanesque chapel in south-central France, the tracks seem to make good use of the space and can essentially be heard as a single piece bearing a fine concentration of focus. I recall my initial impression of Doneda's sound was of the viscerality of a metal tube with holes, the reed almost an afterthought and, much more so than my recent experiences with him, this is happily the case here. Virtually the entire disc consists of that hollow, air-filled, harsh tone he's so adept at achieving, not exactly quiet by any means, but gaseous and torn. There's not any silence to speak of but the exploration is delicate, as though Doneda is taking care to explore the space, the multiphonics beautifully controlled. There's a moment now and then when matters verge on the frenetic but these are thankfully rare. If it's not, ultimately, all that different than what he was doing 15-20 years ago, that's still a pretty high level of rigor, intensity and corporeality, for which we can be grateful. Easily recommended for fans of Doneda but also for newer listeners who may have leapt to players like Bhob Rainey or John Butcher (two of the quotees) and never got around to one of their inspirations and confreres.

Hey Brian, I'm sure you're aware the Doneda cover is in reference to Everybody Digs Bill Evans (http://londonjazzcollector.files.wordpress.com/2012/03/bill-evans-everybodydigs-frontcover-1600.jpg)? (Still cringeworthy rather than funny, though, since the statements try too hard.)

hah, no, not really. Thought it rang a bell, but didn't check. I'm almost entirely ignorant of Evans' work, actually, nothing ever really hit me early on in my listening career (though one of my first jazz albums was George Russell's Living Time, released under Evans' name, which I liked a lot--more for the compositions than Evans, though. Have never really gotten around to reconsidering. So, guilty as charged.

not a huge fan myself, Everybody Digs is not a good record. Russell's 56 Workshop with Evans is fantastic, though, great piano solo on Concerto for Billy the Kid. (https://www.youtube.com/watch?v=JrNf4KL_9SI) There's also e.g. a live Tristano Quintet recording (Konitz and Marsh), except with Evans on the piano, where he's absolutely fantastic. Can't think of much else ... But he's sometimes great when taken out of his comfort zone ...

The cover is a tongue-in-cheek reference, even a parody, of the Bill Evans cover.