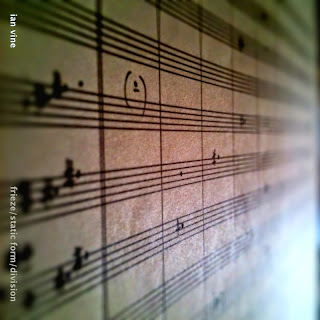 I get the feeling I should have known Vine's work, but I didn't until now. Im not sure how representative these selections are but they're certainly of a piece, all occupying a very lovely section of the steady-state zone, one filled with countless subtle variations. "frieze" is for acoustic guitar and live electronics (presumably including something on the order of an e-bow)and emits several strands of wonderful color. An airy, almost wheezing organ-like tone is one, mid-range but near the bottom of these particular layers, slowly pulsing amidst kindred drones and the occasional sharp accent, like a harsh glint of sunlight. Various tones and timbres enter now and then, all clustered fairly close together but, of course, varying enough to cause sonic perturbations galore. A very beautiful work. "static form" substitutes electric guitar for acoustic but is generally similar, albeit with (not surprisingly) a more electronic tinge to the sounds, the "glints" having more the resonance of dulcimers and, halfway in, the introduction of various rhythmic, rapidly clicking sounds, ending with severe abruptness. Again, a thoughtful, interesting piece. Finally, "division", for nine electric guitars and electronics. Oddly, "blindfolded", I couldn't have told you which of the last two was solo, which a nonet. Still a drone, though, here with a more overt organ-y quality. The pulses are soft and mellifluous and I can imagine the composition working some amount of wonder in situ but on disc, it was the one piece I thought went on a bit longer than its ideas merited.

A very enjoyable recording overall, however, and I'm glad to belatedly hear Vine's work. You can be your own judge at: 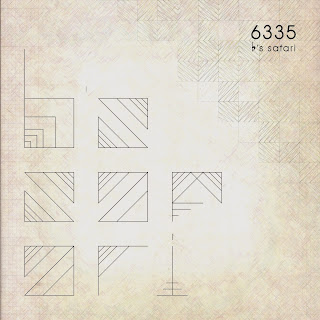 A youthful Salt Lake City-based trio comprised of Brian Pickles, Lance Buchi and Ryan Fedor wielding all manner of electronics, cheap reeds, turntables, mics, etc. The pieces here (recorded in 2010) are loosely organized soundscapes, sometimes incorporating hazy melodic patterns and rhythms, sometimes drifting. "Whoa, Rhonda", the opener, is wonderful, a kind of Ashley-esque, swirling line, awash in lush tonality, multiple lines of what sound like (but probably aren't) bass clarinets, playing a slow, slightly bluesy, almost dirge-like sequence. I'm reminded, oddly, of parts of the 1990 recording on Les Disques du Crepuscule of Bryars' "The Sinking of the Titanic", that kind of resonant underwater feel. The title track stretches things out and adds a healthy dollop of harshness, but meanders a bit overmuch; it's a tough fence to straddle. "Rainbow Jumpers", the other longish cut, is simultaneously spacier and tighter, the floating clouds of softer sounds and heavy fuzz tones ably enveloping the rough clatter that sounds for all the world like random objects tossed about inside a room; quite nice. "Salt Palace" gels a bit better than the second piece, some fine stuttering sounds throughout but again overstays its welcome somewhat. It turns out that those two were recorded outside, the other three in the studio, so perhaps that's somehow the source of (for me)the slight lack of propulsion I found myself wanting to hear. In any event, "g'night ♭'s" takes things out in strong fashion, sprawling and dark but with a solidity and, as in the first piece, a strong sense of melodic content, that carries it through.

Good work overall, give a listen yourself.

Did you know that you can shorten your urls with AdFly and make cash from every visit to your short links.