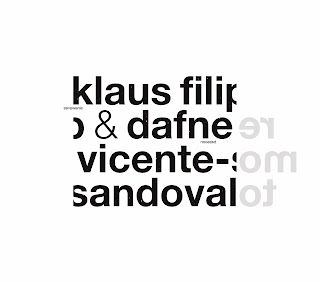 Not nearly enough bassoons in these here parts...though anyone pining for those deep, reedy tones will have to search elsewhere.

Two pieces, one ("Obscur") recorded in Christoph Amann's studio, the other ("Clair") in a Nickelsdorf church. Filip is on sine tones here, not his customary lloopp, using them for relatively long notes, though never really settling into drone territory. Instead, I have the image of thin layers of cloth, multiply-hued within a narrow range, wafting and falling, layer after layer. Vicente-Sandoval skitters between, piercing a swatch of fabric here, caressing it, subtly staining it there. Her attack is entirely outside of standard bassooning, sometimes high-pitched, often tapping the body or the bocal (a newly learned word!--the metal tube between the double reed and the bassoon proper). Part of me really wanted to hear at least a few traditional notes from the woodwind, thinking they may well have blent deliciously with the sines but it was not to be and, in a sense, I credit Vicente-Sandoval with sticking to her guns, so to speak, and doing a great deal with less. I find it difficult to otherwise describe the work. In general form, it's akin to previous music I've heard from Filip (I believe I've only encountered Vicente-Sandoval as part of Bruno Duplant's "Presque Rien" prior to this) in that there's a supple, taut but elastic flow, quiet but firm, a feeling of tonality that accepts perturbations. Even when he descends to speaker-threatening depth, there's a serenity in place, a surety of purpose. Given the nature of the sounds they tend to produce, it's difficult to avoid hearing the sines as being foregrounded though I found that, making a conscious effort not to do so (perhaps more my issue than other listeners') resulted in a fuller, very rewarding experience.

On the second track, the duo is joined quite clearly by the environs in and around the church in which they're recording. The music Flip and Vicente-Sandoval produce is more urgent and pinched at the beginning, sharp slices that become embedded in the ambiance, shrill enough that they (in my imagination) cause the abrupt falling-to-the-floor of some heavy object about seven minutes in. The sounds from both musicians are more aggressive, the sines a bit more sour, with subtle harmonics, the bassoon being assaulted with vigor, rapped at noisily and overblown harshly. But still, there's no crowding and things never get steady-state; always there's an allowance made for ebb and flow. It disintegrates beautifully.

Strong work, very challenging to deal with the fluidity and slipperiness of the structure. I like it a lot and, as ever, would love to hear the pair live--I can easily imagine the sonic repercussions.