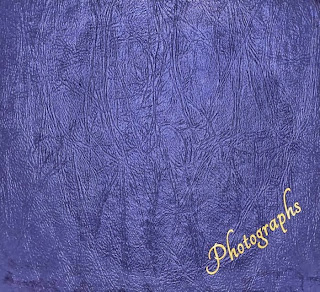 The three albums recorded by Lambkin/Lescalleet were always intended as a kind of trilogy--"The Breadwinner", "Air Supply" and now, "Photographs". Were they to do another, Erstwhile could always capitalize on the classic New York TImes faux pas when a new work of Asimov was advertised as "The fourth volume in the Foundation Trilogy". Barring that, we have these works that insist on being connected though the tendrils and sinews doing so are obscure. I'm given to understand that many such interweavings exist but, puzzle geek though I am, I can only discern a few superficial ones. Each disc contains eight tracks and there's some titular correspondence between the cut names on discs 1 & 3 and 2 & 4 (3 and 4 being the new ones; you'll notice that they're so referred to on the CDs themselves). The third tracks on "The Breadwinner" and the first of the "Photographs" discs each begin with a letter/number combination, E5150 and CT20 1PS. Some routine googling reveals that E5150 is a Black Sabbath composition (who knew?) while the other are the postal coordinates of Lambkin's home town of Folkestone, England. Significance? I've no idea. The seventh track is called "There and Back Again" firstly, "Back Again", most recently. If there are other enigmatic nuggets, I can't find 'em. Similarly, "Air Supply" has three adjacent tracks, "69°F", "68°F" and "67°F" and the second "Photographs" disc contains three cuts sharing self-similar titles in the same slots, each with "Kingdom" preceding the remainder of the title. The earlier disc concludes with "Air Pressure" and "Air Supply", the latter with "Street Hassle" and "Street Cleaner". The first album's cover design overtly referred to Robert Ashley's "Private Parts", the second to a Fripp/Eno bootleg, "Air Structures". This one? No notion on my part, though there's a Jody Whatley recording by the same name... I'm doubtless missing much else, particularly if the "clues" are embedded in the music, but so it goes. I'm not sure if any of this adds appreciably to one's enjoyment of the works, but there it is. More interesting to me is the way the recordings capture a personal relationship between the pair, overtly referred to in the superimposition of their faces on the interior of "The Breadwinner", but quite explicit throughout, including the photos in the release at hand, which, for all their physical disparity (apart from their basic size: large) infer a twin aspect.

Disc Three appears to have been largely recorded in or near Lambkin's home town. It begins with the local fellow's ruminations on loss, including the death of grandparents and ends with comments about a 50₤ cast iron skillet: "yeah, they last a lifetime". Unlike the previous two releases, where I think the only vocalization was a brief snatch having to do with VHS tapes, this one is replete with scenes from daily life, a recorder apparently left running routinely, many of the discussions occurring in the vicinity of food. The sounds not from field recordings (processed or otherwise) tend towards the ambient/electronic, though I suppose it's possible the whole shebang is constructed from "natural" sounds. That there's a huge amount of construction is clear from the start, Lambkin's voice (either slightly slowed down or the result of an old cassette recorder, one gathers) is led into by a short, ringing, electronic crescendo, almost like a camera zoom; there's an almost songlike structure in play. There are Ferrari-esque, distant engine flutters, liquified animal calls (?), microphone buffeting, background hiss implying an open mic in very quiet circumstance, dozens of other elements, all imparting an implicit sense of narrative, disjointed though it is. A priest thanking a congregation for the transport of a statue of Our Lady of Padua segues into trite church organ and echoing choir--Lambkin's childhood house or worship?--dissolving into a molasses of altered pitch, quite moving and dreamy/nightmarish. That resonant hum, a little like the ending minutes of "I Am Sitting in a Room", is picked up at the beginning of the following track, allowed to throb, eventually morphing into a mildly poppy, bubbling swath of electronica, redolent of post-Riley rock bands (for all I know, taken directly from some like source), before a double-tracked female voice recites a list of seemingly unrelated words. A series of sounds like solarized waves, only certain frequencies audible, the rest masked, plays against ultrahigh sineage, reverberant scrapes, suddenly intruded upon by conversation about tea, then confusion about what day it is, a clock ticking. So it goes, much more conversation, casual and humorous...I have to say, not only does everything sound great, no matter how banal the source, but the overall flow is fantastic, richly cinematic even in Super 8. It's also very much in the mode of Lambkin's self-released work of the last few years; the choices made are similarly, though inexplicably excellent. Why and how material like this works so well is a great mystery...

The final disc was recorded in Boylston and Worcester, Massachusetts, I take it either where Lescalleet was raised and/or where his mother (guessing) now lives. I'm not at all sure if each musician was given a bit more weight with regard to the material recorded on his home turf or if it's just a listening bias on my part, but this disc seems to carry a little more Lescalleetian feel, the other more Lambkinesque. Probably in my head. Beginning with soup, concluding with a stated dislike of plum pudding... The first track, following the table chatter, contains some exquisite, near-quiet work, faint hollow bangs and thumps, like distant Partchian cloud-chamber bowls, really wonderful. It gradually blossoms into kitchen sounds, which it likely was all the time, and back into conversation. As in the companion disc, there are references to a church (its bells, its visage) and the track melts into a quasi-similar, blurred kind of pulsing dronage, quite striking. Some of the more intense moments (volume-wise) ensue, howling and screeching, before giving way momentarily to the pair nattering about, soon eclipsed by odd, pitched hums, as though distilled and then dirtied from an organ. Again, a fantastic sequence. This source continues across three tracks, the ones with "Kingdom" in their title, so presumably there's a connection. Those bell-like pots and pans (or whatever they were) recur in the closing track, melting into a thick, rising hum, very slowly winding down before surprisingly (as if anything should be surprising here) transmuting into a kind of processional, chorus and percussion, something I get the feeling I should know (Orff?), looped, iterated for several minutes, dissolving and then lurching back into the kitchen, Lambkin asking, "Jason, were you a fan of the plum pudding?", Lescalleet responding, "No." Cut to silence.

I'm not sure there's anything out there that moves like this; the combination of casualness and discreet organization is wonderful to experience. And, as said, it simply flows beautifully. Something about that nexus of sound and meaning hits the mark time and time again though I can't figure out why. Great work, even if I'm missing most of the puzzle pieces.

The tracks on both discs 1 & 3 and discs 2 & 4 have the same running times for each corresponding track. I still need to listen to this again.