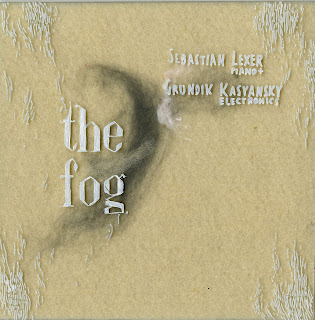 One is forced to begin with the packaging, which is unusual and very beautiful. Ana Martins has created a CD case consisting of two plates of glass, each about 6 inches square and 1/16 of an inch thick, between which she's affixed a kind of pouch made from virgin wool. The gluing method is invisible and the sack is slit on top, allowing the plates to pull apart almost an inch so as to remove the disc. Additionally, the front-facing wool is drawn upon, in my case with what seems to be both black and white chalk; each of the 150 copies is, of course different. The image above is of mine. Title and other information are printed on the glass in raised white. It's all very striking--nice job!

Happily, the music is also very fine. Lexer's piano (plus enhancements) has always had the welcome knack of combining a clear classical sensibility with something quite raw and even grating; that comes very much to the fore in this 2011 set (running a bit less than a half hour), with Kasyansky supplying electronics that include a healthy dollop of old recordings. Those snatches of "traditional" musics (which are enticingly vague, sounding almost like Mussorgsky here and possibly alluding to "Moon River" there, though often residing in old-timey jazz) function as a kind of glue keeping the harsher shards in the same space. The set has a very attractive dynamism on several counts; the volume varies in a kind of rolling fashion, the generally medium-low level punctuated by abrupt violence as well as uneasy quietude, the textures ranging within a defined space, Lexer almost always managing to sound pianistic even if the keyboard is only used sporadically in the usual manner. Kasyansky's contributions are more amorphous, even viscous, the sampled music outweighed by a bagful of electronics; as with the piano, these are used both subtly and, when appropriate, brutally. As can be discerned from this mangled attempt, it's tough music to describe except in sensual terms. Thick and chewy? Something like that. It has an unusual fullness given the relative sparseness of the constituent elements, something a little bit magical. I've listened six or seven times now and I'm hearing more each go-through, always a good sign. I'm somehow reminded of the phrase, "giving good weight".

A strong effort--get 'em while you can.